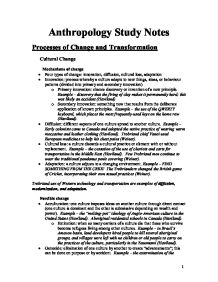 Anthropology Study Notes Processes of Change and Transformation Cultural Change Mechanisms of change * Four types of change: innovation, diffusion, cultural loss, adaptation * Innovation: process whereby a culture adapts to new things, ideas, or behaviour patterns (divided into primary and secondary innovation) o Primary innovation: chance discovery or invention of a new principle. Example - discovery that the firing of clay makes it permanently hard; this was likely an accident (Haviland) o Secondary innovation: something new that results from the deliberate application of known principles. Example - the use of the QWERTY keyboard, which places the most frequently-used keys on the home row (Haviland). * Diffusion: different aspects of one culture spread to another culture. Example - Early colonists came to Canada and adopted the native practice of wearing warm moccasins and leather clothing (Haviland). Trobriand chief Vanoi used European medicines to help his chest pains (Weiner). * Cultural loss: a culture discards a cultural practice or element with or without replacement. Example - the cessation of the use of chariots and carts for transportation in the Middle East (Haviland). Few Trobriand men continue to wear the traditional pandanus penis covering (Weiner). * Adaptation: a culture adjusts to a changing environment. Example - FIND SOMETHING FROM THE CREE! The Trobrianders changed the British game of Cricket, incorporating their own sexual practices (Weiner). Trobriand use of Western technology and transportation are examples of diffusion, modernization, and adaptation. Forcible change * Acculturation: one culture imposes ideas on another culture through direct contact (one culture is dominant and the other is submissive depending on wealth and power). Example - the "melting-pot" ideology of Anglo-American culture in the United States (Haviland). Aboriginal residential schools in Canada (Haviland). o Extinction: when so many carriers of a culture die that those who survive become refugees living among other cultures. Example - in Brazil's Amazon basin, land developers hired people to kill several aboriginal groups, and villages were left with no children or old people to carry on the practices of the culture, particularly in the Yanomami (Haviland). ...read more.

The most popular form of marriage throughout the world, mainly for economic reasons. Example - North Americans typically practice monogamy. o Polygyny: a man marries more than one woman. Reasons vary, but it is usually practiced for economic reasons - multiple wives and children are required to care for the land and livestock. Examples - the Turkana people of Northern Kenya marry more than one woman to take care of the livestock. Trobriand chiefs marry multiple women so that they can gain the wealth from the yam gardens of their wives. The Kapauku of western New Guinea try to have as many wives as possible, and urges her husband to spend money to acquire more wives, but women will divorce their husbands if they can prove that the men can afford more wives but refuse to marry. o Polyandry: the marriage of one woman to many men. Reasons are to prevent the dividing of possessions, to restrain population growth and reduce strain on resources, and provide a household with male labour. Example - many Tibetans practice polyandry (frequently fraternal polyandry, in which one woman marries a group of brothers) to avoid overpopulating the land. o Group marriage: several people have access to one another. o Levirate and sororate marriages: a widow or widower marries the brother or sister of his or her dead spouse, often to provide social security in the society (to ensure that there are enough kin for this, cousins are often classified as brothers and sisters). o Serial monogamy: a man or woman marries or lives with a series of partners in successful. Example - this is common in Western societies in which there is a high divorce rate. o Cousin marriage: a man or woman marries his or her cousin. Types of cousin marriage: o Matrilineal cross-cousin marriage. Example - usually found in food-foraging groups which have little property but need to establish and maintain strong ties between social groups. ...read more.

This bond between partners is very important in maintaining a kula path. The men who sail return with these goods and kula from their partners and will then be hosts when their partners from the next island come to pick up the kula from them. o The introduction of technology has started to change these expeditions and motor boats are sometimes substituted for canoes. o Kula expedition do not necessarily have to occur between islands; rather, with more common people participating in kula, kula partners can live on different parts of an island and the expeditions can be made on foot. o Kitomu in kula o When a Trobriander acquires a kitomu they can decide to put it on a kula path. o Members of many paths will send the owner of kitomu shells (vaga) and presents to try to attract his kitomu so that they can be his partner and have fame by being associated with a valuable kitomu. o The owner may send small necklaces to test the paths before moving his kitomu o After conversations and small exchanges with interested partners the owner will consider the strength of the paths of his prospective partners and who he can trust to find an equal match for his kitomu. o Once the owner decides on a partner he puts his kitomu into circulation with this partner. o While the partner looks for a shell of equal value to the kitomu they send the owner basi to indicate that they are searching for a shell for him and to keep the path active. o When the partner finds and appropriate match for the kitomu this shell is circulated to the owner. o This new shell now becomes his new kitomu and can be circulated on another path. o This circulation of kitomu strengthens the kula path and opens it up for regular kula exchange between these partners. o To persuade the owner of a kitomu to keep it circulating on their kula path his partner sends him kunilevila which represents a gain, or profit, for the owner. 1 ...read more.