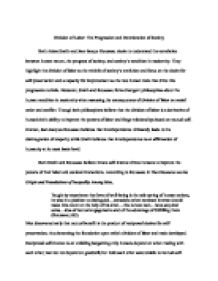 Both Adam Smith and Jean-Jacque Rousseau desire to understand the correlation between human nature, the progress of society, and societys condition in modernity.

Division of Labor: The Progression and Deterioration of Society Both Adam Smith and Jean-Jacque Rousseau desire to understand the correlation between human nature, the progress of society, and society's condition in modernity. They highlight the division of labor as the vehicle of society's evolution and focus on the desire for self-preservation and a capacity for improvement as the two human traits that drive this progressive vehicle. However, Smith and Rousseau form divergent philosophies about the human condition in modernity when assessing the consequences of division of labor on social order and conflict. Though both philosophers believe that the division of labor is a derivative of humankind's ability to improve the powers of labor and forge relationships based on mutual self-interest, Jean-Jacques Rousseau believes that interdependence ultimately leads to the disintegration of empathy while Smith believes that interdependence is an affirmation of humanity at its most basic level. Both Smith and Rousseau believe innate self-interest drives humans to improve the powers of their labor and societal interactions. According to Rousseau in The Discourse on the Origin and Foundations of Inequality Among Men, Taught by experience that love of well-being is the sole spring of human actions, he was in a position to distinguish...occasions when common ...read more.

The improved quality of products, rise in the amount of leisure time, and increased productivity are consequences of specialization and "this same trucking disposition which originally gives occasion to the division of labour" (Smith, 16). In other words, increased productivity and specialization create the conditions for society to advance and the quality of life to improve; all of which are a product of the division of labor - the pinnacle invention of humankind's adaptability and regard for self-preservation. Though Smith and Rousseau agree that the division of labor accelerates society's progress into modernity and are due to faculties found in human nature, the philosophers diverge in their viewpoints when assessing the consequences of said societal change on social order and conflict. Rousseau depicts society's progression with cynicism and disdain, Nascent Society gave way to the most horrible state of war: Humankind, debased and devastated, no longer able to turn back or to renounce its wretched acquisitions, and working only to its shame by the abuse of the faculties that do it honor, brought itself to the brink of ruin (Rousseau, 172). To Rousseau, division of labor results in innovation and interdependence, but for the worse. ...read more.

Since the tendency to barter and exchange is a derivative of humankind's propensity for self-preservation and perfectibility, Smith believes that affirming interdependence is the most human thing one can do and only improves the general welfare and quality of life for all of society. Furthermore, Smith disagrees with Rousseau's belief that interdependence creates social inequity, but rather that "the person who either acquires, or succeeds to a great fortune, does not necessarily acquire or succeed to any political power, either civil or military" (Smith, 34). In other words, division of labor and dependence between humans in the marketplace does not generate social disparities or conflict, but rather maximizes utility. To Rousseau and Smith, malleability and perfectibility under the division of labor acquires a different set of consequences for society in modernity. To Rousseau, interdependency warps humankind's primal self-interest from mere survival to economic and political greed; thus rearing a state of malicious rivalry and exploitation on all sides. To Smith, the primal self-interest was and always will be to work less and enjoy more personal and collective rewards. He believes that social harmony is a natural outcome of humankind's propensity to live and work together. Therefore, self-interest drives the economy and accelerates social progress, facilitating mutual benefits and increased universal prosperity for everyone. ?? ?? ?? ?? ...read more.