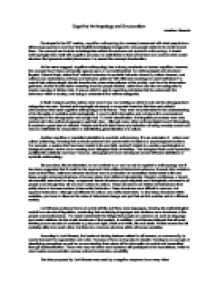 Cognitive Anthropology and Structuralism Jonathan Quaade Developed in the 20th century, cognitive anthropology is a concept concerned with what people from different groups know and how that implicit knowledges changes the way people relate to the world around them. The concept can include subcategories called ethnoscience and symbolic anthropology. A french anthropologist also dealt with cognitive process, he established a theory that there are unobservable social structure that generate social phenomena. He named the concept structuralism. As the name suggest, cognitive anthropology has a strong emphasis on human cognition; however, the concept hasn't been universally agreed upon or conventionalized. An anthropologist and structural linguist, Edward Sapir, stated that "cultural behaviour is symbolic behavior shared by culture bearers, and cultures are abstractions of ideas and behavior patterns" with different meanings for each individual. He meant that anthropologist should describe the observable patterns of the society, and from the information gathered, she/he should derive meaning from the people studied, rather than use his own categories to create meaning of his/her data. ...read more.

Several other scholars such as Karl Marx, believed universal structure were a production of necessities fundamental to life and these sought universal structures of human nature from different standpoints. Claude Levi-Strauss, a french structuralist, searched for deep, unapparent innate structures psychologically and biologically universal to all people even though they all vary from culture to culture. These structures are hidden infrastructures that subtly show in humans surface (observable) behaviour. Deep structures were difficult to uncover, but apparent behaviour. although conditioned to culture, are easily observable. To find deep structures within societies, you have to discover the rules of behavioral change and put that set into another set of a different society. Levi-Strauss analyzed forms of social activity as if they were languages, drawing his methodological model from structural linguistics, concluding that underlying languages and relations were structures of the people unconsciousness. He meant underneath the things that people are unaware of, such as language and social relations, lie the social structures of that society. ...read more.

Like basic biological inheritance of Homo Sapiens, there is also a mental inheritance, Levi-Strauss argued that all cultures are therefore molded by their social and physical environment. His work on structures of elementary kinship, was the basis on women in marriage and subsequently created a whole new look at marriage. He proposed that elementary kinship systems are first of all means to regulating the exchange of women and creating alliances between groups. In conclusion, cognitive anthropology seeks to explain the patterns of shared knowledge, cultural innovations and transmissions over time, using methods and theories of cognitive sciences. And also examining the ways that people of different cultures classify or categorize items of their everyday world. Using a similar concept for hypothesis, Levi-Strauss developed his own theory. He said that structuralism is the mental structures that underlie all the actions of human behaviour, e.g just like we are unaware of grammar while we speak, we are also unaware of the workings in social structure in our daily lives, which means there is a cognitive or mental meaning behind every act even if we are unaware of it. ...read more.