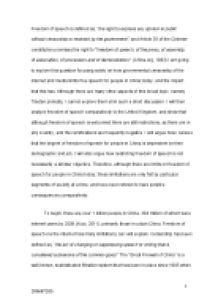 Discuss Free Speech in China Compared to the UK

﻿Freedom of speech is defined as, ?the right to express any opinion in public without censorship or restraint by the government?, and Article 35 of the Chinese constitution promises the right to "freedom of speech, of the press, of assembly, of association, of procession and of demonstration." (China.org, 1982) I am going to explore this question focusing solely on how governmental censorship of the internet and media limits free speech for people in China today, and the impact that this has. Although there are many other aspects of this broad topic, namely Tibetan protests, I cannot explore them all in such a short discussion. I will then analyze freedom of speech comparatively to the United Kingdom, and show that although freedom of speech is welcomed there are still restrictions, as there are in any country, and the ramifications are frequently negative. I will argue how I believe that the degree of freedom of speech for people in China is dependent on their demographic and job. I will also argue how restricting freedom of speech is not necessarily a sinister objective. Therefore, although there are limits on freedom of speech for people in China today, these limitations are only felt by particular segments of society at a time, and have been shown to have positive consequences comparatively. To begin, there are over 1 billion people in China, 384 million of whom were internet users by 2009 (Xiao, 2011), primarily those in urban China. Freedom of speech via the internet has many limitations, as I will explain. Censorship has been defined as, ?the act of changing or suppressing speech or writing that is considered subversive of the common good.? The ?Great Firewall of China? is a well-known, sophisticated filtration system that has been in place since 1995 when the internet first became commercially available to people in China. The rules that have been created from 1995 to the present have been implemented to control and supervise nearly all aspects of the internet. ...read more.

It is compulsory to have a license, which is granted by the state, and so not adhering to these rules can lead to licenses being revoked by the Central Propaganda Department, the main regulatory body. In the same way, they can shut down media websites if they feel that the publishing is somehow damaging to China in any way, for example in 2012, Bloomberg and New York Times were blacked out because they ran stories on the personal wealth of Xi Jinping and Wenjaboo (Council on Foreign Relations, 2013). It is journalists, however, who arguably have their freedom of speech oppressed the most. For example, journalists will not be paid until their work has been checked and published which acts as a huge disincentive to not follow the ?main melody? of the party. In addition, journalists can face reprisals at work, fines and imprisonment, with Reporters Without Borders estimating that in 2011 alone 27 journalists were imprisoned, one being Tan Zuoren who was ?sentenced to 5 years imprisonment for drawing attention to government corruption and poor construction of schools after the 2008 earthquake in Sichuan province? (Council on Foreign Relations, 2013). For the CCP, media is the ?mouthpiece of the party? (Xiao, 2011) and is there to propagate positive views of the party. For example, there are often photos and videos of party officials shaking hands, and news comparing the growth of their economy with other countries, particularly the west. At the same time, the CCP selectively chooses which negative press to block or allow, so as to not create social unrest, although this too limits the news that journalists are able to cover. If we take the Tiananmen Square massacre of 1989, for example, media coverage and access to internet information was essentially banned, meaning that neither journalists or ordinary citizens could voice their opinions or find out more information regarding the incident. ...read more.