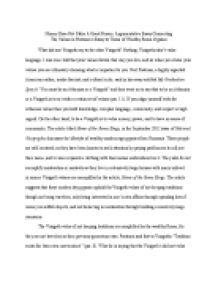 Discussion of the article &quot;Home of the Roma Kings&quot;, in the September 2012 issue of National Geographic discusses the lifestyle of wealthy modern-age gypsies from Romania

﻿Money Does Not Make A Good Person: Argumentative Essay Connecting The Values in Postman?s Essay to Those of Wealthy Roma Gypsies What did one Visigoth say to the other Visigoth? Nothing, Visigoths don?t value language. I was once told that your values dictate that way you live, and so when you chose your values you are ultimately choosing what is important to you. Neil Postman, a highly regarded American author, media theorist, and cultural critic, said in his essay entitled My Graduation Speech "You must be an Athenian or a Visigoth? and then went on to say that to be an Athenian or a Visigoth is to act with a certain set of values (par. 11). If you align yourself with the Athenian values then you hold knowledge, complex language, community, and respect in high regard. On the other hand, to be a Visigoth is to value money, power, and to have no sense of community. The article titled Home of the Roma Kings, in the September 2012 issue of National Geographic discusses the lifestyle of wealthy modern-age gypsies from Romania. These people are self-centered, as they have been known to seek attention by paying performers to call out their name, and to wear expensive clothing with their names embroidered on it. ...read more.

Secondly, the Visigoth value of only being interested in one?s own affairs is followed by the Roma through their spending of lots of money on selfish objects. Postman writes about the lack of meaning of community to a Visigoth. He also said, ?A modern Visigoth is interested only in his own affairs? (par. 9). This means that the Visigoths only cared about their own well-being. Likewise, the Roma gypsies are also made out to value themselves. One wealthy Roma was quoted saying, "We are the most civilized gypsies in Romanian"(O?Neill 140). When an outside journalists was in the town of these gypsies he was told to go away, and that he was not wanted here. The outsider was not accepted into their community because they do not care about other people. Not only do they not care about outsiders, but they are self-centered. For example, there is a picture of a band member accepting hundreds of dollars for calling out the donor?s name and playing his request at a party. There is another example of a man wearing a tie made out of gold thread, with his name and car type written on it. Wealthy Roma gypsies maintain the same value of only being interested in one?s own affairs as the Visigoths. ...read more.

In both pieces, the two groups of people are described in a stereotypical manner, so it is not just to say that every Visigoth and every wealthy gypsy from Romania share the same values, but it can be said that as an overview, the gypsies share values that are more similar to the Visigoths than the Athenians. Postman divides people into two groups, and those groups represent two different sets of values. He uses the example of the Visigoths and the Athenians in order to show that everyone has a choice in life to chose what values they want to follow, and it is an important choice, for your values will dictate how you live your life. The wealthy gypsies have chosen to live their lives valuing their expensive homes and cars, themselves, and not the traditions of their ancestors. One cannot tell if they are happy living this way, or if they would be happier living with a different set of values. However, I would hypothesize that happiness is found in the appreciation of things that are more Athenian than Visigoth, such as art and language, and that it can not be found in an empty room of a mansion. For this reason, I hope that more people chose to value the non-material aspects of life, so that they may find happiness. ...read more.