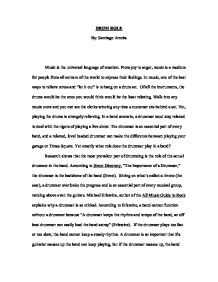 DRUM ROLE By: Santiago Arroba Music is the universal language of emotion. From joy to anger, music is a medium for people from all corners of the world to express their feelings. In music, one of the best ways to relieve stress and "let it out" is to bang on a drum set. Of all the instruments, the drums would be the ones you would think would be the least relaxing. Walk into any music store and you can see the clerks wincing any time a customer sits behind a set. Yet, playing the drums is strangely relieving. In a band scenario, a drummer must stay relaxed to deal with the rigors of playing a live show. The drummer is an essential part of every band, and a relaxed, level headed drummer can make the difference between playing your garage or Times Square. Yet exactly what role does the drummer play in a band? Research shows that the most prevalent part of drumming is the role of the actual drummer in the band. According to Street Directory, "The Importance of a Drummer," the drummer is the backbone of the band (Street). Sitting on what's called a throne (the seat), a drummer overlooks the progress and is an essential part of every musical group, ranking above even the guitars. ...read more.

A high hat is composed of two cymbals one on top of the other, attached to a rod which is connected to a pedal. This pedal moves the rod up and down and clashes the cymbals together. A snare drum has a sort of chain attached to the bottom, and when taut, this chain vibrates giving the snare its snap. Bass drums are played with pedals are can be booming or a short thud. Toms are basically your 'George of the Jungle' drums and are used for filler. Cymbals accent the music (Expert Village). Music truly is the universal language. From the rain forests of South America to the Great Wall of China, drums make up a large part of mankind's music. Works Cited Brown, Ashley, ed. The Marshall Cavendish Illustrated History of Popular Music. 21 Vols. New York: Freeport, Long Island. Marshall Cavendish Co. 1990. Erlewine, Michael. All Music Guide to Rock. San Francisco, CA: Miller Freeman Books, 1997. "Expert Village." How to Play the Drums. October 19th, 2008. Demand Media, Inc.. 4 November, 2008. < http://www.expertvillage.com/video-series/690_learn-how-to- play-drums-beginner.htm > "The Importance of a Drummer." Street Directory. Jan 16, 2008. 14 Nov, 2008. Personal Interview. James Pardue, December 1, 2008. PERSONAL INTERVIEW WITH JAMES PARDUE 1. The drummer's primary role is to be the glue that holds a band together. ...read more.

Our lead singer was Mike Wheless. He's a DJ on WQDR (94.7) in the morning. He's gone country on me. In school I was the 2nd chair percussionist at All-State band my senior year. At NC State, I was drumline captain for 2 years (4th and 5th year???). I wrote several cheers with the cheerleaders that they still use and one cadence I wrote is still used as the band marches in and out of the stadium almost 20 years later. They eeven recorded it on a CD a few years ago but didn't give me any props. I played in several other bands in college. We played mostly frat parties but some clubs, traveleing as far away a Richmond and Wilmington. We never made any money, beacuse we had to rent so much equipment. And I never picked up any girls. I was always the first one at a gig, and the last one to leave. I never had a roadie and had to pack my mess up. If you're in music for girls, stick with guitar. I tried a country band after college. That lasted two weeks. I took about 6 years off from playing in my late 20's. You know - marriage....kid....another kid. I started back playing in a contemporary christian band and I now play in Progressive Rock band, 'The Ambient Noise.' We play music stuff by Yes, Genesis, Rush, Iona (celtic) and my fav Porcupine Tree. Notice, I payed homage to my first band in the name. ...read more.