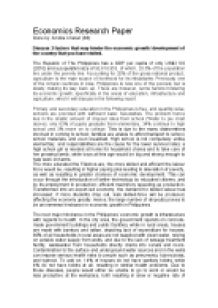 ﻿Economics Research Paper Done by: Anisha Charan (B6) Discuss 3 factors that may hinder the economic growth/ development of the country that you have visited. The Republic of The Philippines has a GDP per capita of only US$2,132 (2010) and a population size of 93,616,853, of which, 26.5% of the population live under the poverty line. Accounting for 20% of the gross national product, agriculture is the main source of livelihood for its inhabitants. Previously one of the richest countries in Asia, Philippines is now one of the poorest, but is slowly making its way back up. There are however, some factors hindering its economic growth, specifically in the areas of education, infrastructure and agriculture, which I will discuss in the following report. Primary and secondary education in the Philippines is free, and quantity-wise, schools are provided with sufficient basic necessities. The problem hence lies in the drastic amount of dropout rates from school (*Refer to pie chart above); only 63% of pupils graduate from elementary, 34% continue to high school and 3% move on to college. ...read more.

Hence, the large number of dropouts proves to be an immense hindrance in economic growth in Philippines. The next major hindrance in the Philippines? economic growth is infrastructure with regards to health. In the city area, the government spends on concrete-made government buildings and public facilities, while in rural areas, houses are made with bamboo and rattan, depicting lack of expenditure for houses. 66% of all households in rural areas are not supplied with clean water, relying on potable water supply from wells, and due to the lack of sewage treatment facility, wastewater from households directly drains into canals and rivers. Contamination to the surface and underground water sources and in the wells can impose serious health risks to people such as pneumonia, tuberculosis, and typhoid. To add on, 14% of houses do not have sanitary toilets, while 4% do not have toilets at all, resulting in similar health problems. Due to these diseases, people would either be unable to go to work or would be less productive at the workplace, both resulting in slow or negative rate of production. ...read more.

As rice is the staple food in Philippines, it is important to promote agricultural development in order to alleviate poverty. Furthermore, landlords are converting agricultural farmland into golf courses and agro-industrial parks, reducing space area for cultivation. If this is prevented, rice can be cultivated, without stopping the cultivation of non-rice products for exportation. This also helps reduce the unemployment rate. Moreover, if rice is cultivated, Philippines would not have to rely so much on imports, and can invest their money in other industries, where it is needed such as housing and sanitation in rural areas. In conclusion, I believe that the government lacks where it should be rightfully spending money; instead of quantity-wise for education where it is adequate, the government should spend more on incentives to bringing children to school such as providing breakfast or free transport of school buses. It should spend on housing and sanitation instead of urban developments and should secure the problem of poverty in its own country by cultivating rice before exporting non-rice products to other countries. By doing this, I feel Philippines will have a higher chance of achieving development. ...read more.