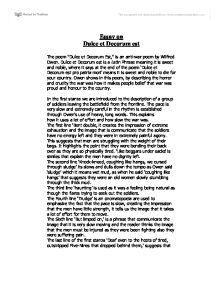 Essay on Dulce et Decorum est The poem "Dulce et Decorum Est," is an anti-war poem by Wilfred Owen. Dulce et Decorum est is a Latin Phrase meaning it is sweet and noble, where it says at the end of the poem 'Dulce et Decorum est pro patria mori' means it is sweet and noble to die for your country. Owen shows in this poem, by describing the horror and cruelty the war was how it makes people belief that war was proud and honour to the country. In the first stanza we are introduced to the description of a group of soldiers leaving the battlefield from the frontline. The pace is very slow and extremely careful in the rhythm is established through Owen's use of heavy, long words. This explains how it uses a lot of effort and how slow the war was. The first line 'Bent double, it creates the impression of extreme exhaustion and the image that is communicate that the soldiers have no energy left and they were in extremely painful agony. This suggests that men are struggling with the weight of their bags. ...read more.

The contrast of 'ecstasy and fumbling' is an effective way of showing this. The opening to the stanza, words are used to say that the movements of the soldiers, such as 'clumsy,' and 'stumbling, is the Result' that gives the reader the impression that the whole plan was very poorly organized. Alliteration is then used in the third line to emphasize that there is just one person left, making just little movements. 'Someone still was yelling out and stumbling.' This creates the impression that the soldier is in big panic and knows how serious it is to fit his helmet. The writer then uses the simile in the sixth line 'As under a green sea I saw him drowning.' This tells us that the soldiers were suffering and it isn't a sweet way to end one's life. The seventh line, Owens describes his sight as being 'helpless,' he wanted to help the soldiers who were struggling, but it was just impossible for him to do so and it creates the impression that the writer himself was in a dangerous situation. ...read more.

The writer has said if the reader had experienced this agony painful situation themselves, then they wouldn't tell with such 'high zest to children ardent for some glory, The old Lie: Dulce et Decorum est Pro patria mori.' Basically Owen meant was if he has to talk to a children about the war he wouldn't talk in excitement and it was just all the lies about sweet and noble to die for your country. Now I think the point the reader should begin to understand the experience that the writer is explaining and start to realize how offensive it was. I think that the writer describes the death so real and to try and get through to the reader how horrific it really was. It describes how exact the man is being tortured. I think Wilfred Owens aim of this poem was to get them a shock the reader want to let them feel the sense of disgusting and feeling felt by all the soldiers as they struggle to breath. At no point in this poem does Owen make use of making his poem not sound offensive. He is very clear about the horror of war. By eve khothisen ...read more.