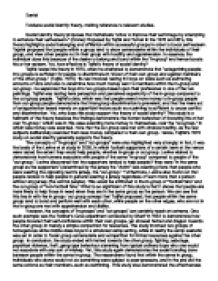 Daniel Evaluate social identity theory, making reference to relevant studies. Social Identity theory proposes that individuals "strive to improve their self-image by attempting to enhance their self-esteem." (Crane) Proposed by Tajfel and Turner in the 1970 and 80's, this theory highlights social belonging and affiliation within successful groups in order to boost self-esteem. Tajafel proposed that people within a group tend to show camaraderie within the individuals of their group, and view other people not in their group with hostility and apprehension. In essence, the individual does this because of the desire to belong and bond within the "in-group" and hence boosts his or her esteem. Yet, how effective is Tajfel's theory of social identity? Tajifel tested his theory in 1970, when he attempted to demonstrate that "categorizing people into groups is sufficient for people to discriminate in favour of their own group and against members of the other group." (Tajfel, 1970) His test involved testing 64 boys on tasks such as estimating amounts of dots and also to determine how much money went to members within the in-group and out-group. He separated the boys into two groups based upon their preference to one of the two paintings. ...read more.

We can see that this ties in with the in group / out group concept that Tajifel proposed; that people within the same group tend to bond and perform well with each other, while people on the other edges, who are not in the in-group are met with apprehension and dislike. However, the concepts of "in-groups" and "out-groups" can certainly reach an extreme. One such example was the Robber's Cave experiment conducted by Sherif in 1954 to demonstrate how people boosted their self-confidence within their own groups, yet showed hatred and disgust towards the other group; in merely a simple competition for resources. The study involved two groups of homogenous white middle class boys in a simulated camp setting, while in reality the camp scenario was set in order to foster group camaraderie and competition for limited resources against the other group. In conclusion, the study ended with hatred towards the other group, fighting, sabotage, psychical violence, theft, gang-type behaviour stemming from typical ordinary boys who one would not associate with any sort of mishap. Yet, this study again demonstrates the social bonding done between people within the same in-group. ...read more.

Yet, if their team lost that match, they were much less likely, How does that relate to the theory however? It relates because of the human need for positive self esteem; one would be much more positive towards something that he or she represents within "the group." Hence, Cialdini's study does corroborate social identity theory. Does the social identity theory really work out in society? To quite a great extent; yes. Tajifel's argument is that we bond well with our own group and go against the other group for the sake of our own self-esteem; other researchers' studies have corroborated that. However, the theory itself is not without its weaknesses and limitations. The theory does manage to describe, yet cannot actually predict the human behaviour. In other words, one can tell what social behaviours groups and individuals are going through, but cannot predict the actions that occur later. Another issue is that the theory reduces the individual into isolation, and does not address the environmental factors that also play a role with behaviour; not to even mention social factors. Yet, social identity theory is in general, rather well supported. Daniel handwrote this paper with only the aid of notes within one hour. May 31, 2012 Start time: End time: _______________________ ...read more.