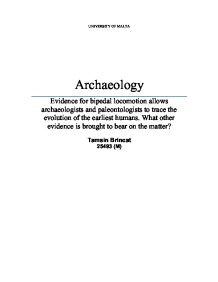 Evidence for bipedal locomotion allows archaeologists and paleontologists to trace the evolution of the earliest humans. What other evidence is brought to bear on the matter?

UNIVERSITY OF MALTA Archaeology Evidence for bipedal locomotion allows archaeologists and paleontologists to trace the evolution of the earliest humans. What other evidence is brought to bear on the matter? Tamsin Brincat 25493 (M) Human lineage is nothing but the fruit of evolution: our genealogical family tree demonstrates that our ancestors were in fact primates. The story of human evolution starts in Africa and dates back millions of years. Archaeologists and palaeontologists use the archaeological evidence obtained from these sites in order to provide us with a framework of the development of the human species. In 1871, Charles Darwin, the father of the theory of the process of evolution by natural selection, proposed that humans and apes have a common ancestor. Thanks to anatomical and molecular studies we now know that 98% of African chimpanzee DNA is identical to that of humans. However, this does not mean that chimpanzees are our ancestors. This might however imply that we share a common ancestor. During the mid-Miocene period, around 8 million years ago, different apes dominated most of the African continent which was covered in lush vegetation. As these apes abounded in the African forests, their bodies adapted to the environment, hence developing grasping toes and joint mobility in arms and shoulders. These features provided them with brilliant surviving tools. By 6 million years ago, the world started experiencing a climate change which transformed these lush forests into open woodland. ...read more.

Furthermore, even the pelvis had to undergo evolutionary changes: since it is closer to their new centre of gravity, the articular ball of the hip joint exerted only half of the pressure on the joint that a human's does. Debates between paleoanthropologists have arisen: some arguing that due to the long arms and the curved phalanges our early ancestors were partly arboreal, others claim that the foramen magnum, the broad and short pelvis, the femur with a long neck and the changed leg anatomy prove that they were committed to bipedal locomotion. Nonetheless, it is a fact that the Australopithecines' first steps have led to the evolution of the human species: as they walked upright, they moulded their destiny with their evolutionary anatomical changes which were to be passed on to us modern humans. However, these evolutionary changes were not the only ones taking place during the course of time. As time unravelled itself, we can see that the stature of Homo sapiens is not the same as that of a chimpanzee, or even of that of an Ardipithecus ramidus. As said before, due to changes in the spine, changes of the centre of gravity, a change in the positioning of the foramen magnum, changes in the distribution of weight- hence, forcing changes in the pelvis as well as in leg anatomy, have drastically contributed to our present stature. ...read more.