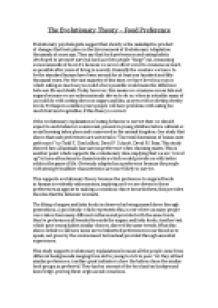 ﻿The Evolutionary Theory ? Food Preference Evolutionary psychologists suggest that obesity is the maladaptive product of changes that took place in the Environment of Evolutionary Adaptation thousands of years ago. They say that food preferences and eating habits developed to promote survival such as when people ?binge? eat, consuming excess amounts of food, it?s because we are in effect wired to consume as much as possible after years of living in scarcity. Basically the creature we know to be the standard human have been around for at least one hundred and fifty thousand years. For the vast majority of this time, we have lived in a way in which eating as much as you could where possible could mean the difference between life and death. Today however, this means we consume excess fats and sugars because we are subconsciously driven to do so, when in actuality many of us could do with cutting down on sugars and fats, as seen with rocketing obesity levels. ...read more.

The liking of sugars and fatty foods is observed as being passed down through generations. A good study, which represents this, is one where as many people were taken from many different cultures and provided with the same foods, they?re preferences all trended towards the sugary and fatty foods. Another test, which gave young babies similar choices, showed the same trends. What this shows is that we all have some sort of inherited preferences in our blood so to speak, not given by the environment but instead provided through ancestral experiences. This study supports evolutionary explanations because all the people came from different backgrounds ranging from old to young to rich to poor. Yet they all had similar preferences. Another great indicator is how the babies chose the similar food groups as preferred. They had no concept of the food and no background knowledge, proving these urges as sub conscious. These studies can however be criticized, because they leave some preferences unexplained. ...read more.

We can?t go back it time and see if our predecessors really did have the same tastes, and therefore if we are accustomed to them ourselves for that reason. Because the whole concept can?t be properly proved it makes it very difficult to look at as a whole, all we can do is work on the basis of assumption. We can say maybe this happens because of this, but we wouldn?t be able to tell unless we put someone on a specific diet and make sure there offspring do the same and so on for the next 50 million years, which is a unlikely if not possible scenario all together. There is obvious reasoning behind the idea that our tastes are inflicted by past tastes of our ancestors. Yet it is improbable that this is the main factor. Were these the main factor, why would we not of develop 100 % universal tastes after all this time? The food industry would have a slight problem if everyone liked the exact same thing. ...read more.