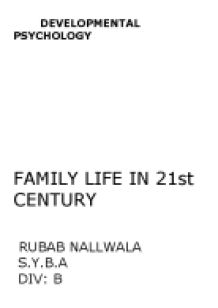 Family Life in India, The Nuclear Family and the Effects of Divorce on Children.

﻿DEVELOPMENTAL PSYCHOLOGY FAMILY LIFE IN 21st CENTURY RUBAB NALLWALA S.Y.B.A DIV: B ROLL NO. ? 176 SEMESTER - III ________________ family life in 21stcentury EVOLUTION OF FAMILY SYSTEM IN INDIA A family is ?a group of two or more people who reside together and who are related by birth, marriage, or adoption? A perusal of varied literature on Indian society and culture, particularly generated by Ethnographers, Historians, Christian missionaries and subsequently by Anthropologists and Sociologists, suggests that the twentieth century recorded certain changes of far reaching importance in the family system under the influence of westernization, industrialization, modernization and greater population mobility across the sub-continent. Since time immemorial the joint family has been one of the salient features of the Indian society. But the twentieth century brought enormous changes in the family system. Changes in the traditional family system have been so enormous that it is steadily on the wane from the urban scene. There is absolutely no chance of reversal of this trend. In villages the size of joint family has been substantially reduced or is found in its fragmented form. Some have split into several nuclear families, while others have taken the form of extended or stem families. Extended family is in fact a transitory phase between joint and nuclear family system. The available data suggest that the joint family is on its way out in rural areas too. ...read more.

Communication channels between the child and parent can also be more open and transparent, in a nuclear family, as parents have their attention focused on their child, without having to divide their time with too many household responsibilities and between other members of the household. While nuclear families seem to work for today?s generation in a lot of ways, there are challenges that parents face while raising their child in this set ? up. If both parents are working, one may have to leave their children alone with caretakers for given lengths of time. This can mean children being brought up by care centers or domestic help, who may not be as attentive or reliable as family members. Parents may also have to deal with attention-related problems which are usually by-products of nuclear family systems, where the child, finding both parents absent and no one else from the family, usually resorts to attention seeking behavior. Being sad, insolent, and reclusive among other things .Children raised in nuclear families also tend to be less tolerant and more impatient, as they are not accustomed to dealing with too many people with varied personalities from an early age, and living in a nuclear family does not demand a great deal of flexibility of them. Children from nuclear family struggle to adapt themselves to different situations, especially when they have relatives visiting them. The child has to follow only one set of rules, and is not confused with varying opinions. ...read more.

However, they are faced with the task of integrating the divorce experience with their own developing identities. Boys and girls tend to react differently to their parents' divorce. As a rule, girls tend to become anxious and withdrawn, while boys tend to become more aggressive and disobedient. Girls from divorced families may become sexually active earlier than girls from intact families. Interestingly, boys often adjust better when their mothers remarry, while girls have more difficulty. Children of divorced families tend to have long-term adjustment difficulties when there is ongoing conflict between their parents. Boys, in particular, are likely to display marked behavior problems when this exists. Children's adjustment is also determined by the amount of conflict the parents had before the divorce. Unfortunately a practical change that often happens with divorce is a reduce in standard of living. This may cause the custodial parent to be overwhelmed, and unable to meet the needs of the child. Counseling is an excellent resource for divorced/separating couples. A trained and licensed therapist can provide an objective viewpoint and can synthesize the dysfunctions in the relationship. Children will recall how much they felt loved if one or both parents sought advice from an expert. Being ascertain that the therapist is trained in marriage and family therapy, makes certain that goals that are in the children's best interest are attained. The message that children are first is the greatest healing for their hearts and will help in proper personality formation and elimination of stressors. ...read more.