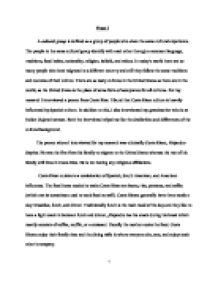 For my research I interviewed a person from Costa Rica. I found that Costa Rican culture is heavily influenced by Spanish culture. In addition to this, I also interviewed my grandmother who is an Indian Gujarati woman. Both the interviews helped me list t

Phase I A cultural group is defined as a group of people who share the same cultural experience. The people in the same cultural group identify with each other through a common language, traditions, food habits, nationality, religion, beliefs, and values. In today's world there are so many people who have migrated to a different country and still they follow the same traditions and customs of their culture. There are as many cultures in the United States as there are in the world, as the United States is the place of some form of acceptance for all cultures. For my research I interviewed a person from Costa Rica. I found that Costa Rican culture is heavily influenced by Spanish culture. In addition to this, I also interviewed my grandmother who is an Indian Gujarati woman. Both the interviews helped me list the similarities and differences of the cultural background. The person whom I interviewed for my research was ethnically Costa Rican, Alejandro Saprisa. He was the first from his family to migrate to the United States whereas the rest of his family still lives in Costa Rica. He is not having any religious affiliations. Costa Rican cuisine is a combination of Spanish, South American, and American influences. The food items needed to make Costa Rican are beans, rice, potatoes, and coffee (which can be sometimes used to cook food as well). Costa Ricans generally have three meals a day: breakfast, lunch, and dinner. Traditionally lunch is the main meal of the day and they like to have a light snack in between lunch and dinner. Alejandro has his snack during his break which mostly consists of coffee, muffin, or a croissant. Usually the mother cooks the food. Costa Ricans enjoy their family time and the dining table is where everyone sits, eats, and enjoys each other's company. Due to modernization, the lifestyle and the food habits slightly change. ...read more.

My grandmother said that American influence has not influenced her eating habits but she can see the eating habits of her children and grandchildren to be different than what her era was like. She believes that Americans eat more often in restaurants that serve pizzas, pastas, burgers, etc., which according to her is not good food. It is considered to be unhealthy for her. Similarities between the two cultures (according to me) There are a very few things in common between the Costa Rican and the Indian culture. The only thing I can remember being common is that the mother or the women in the house cooks the food. Other than that, I can see major differences between the cultures. For example, some of the major differences can be found in everything the food, religion, food taboos, number of meals consumed during the day, etc. These differences have a profound effect on each cultures world view. I encountered interesting facts about Costa Rican cuisine as well as Indian culture while working on this assignment. Such experiences help make clear the disjunction between the two cultures. Phase- II (I) Costa Ricans have several various food dishes and a few of them are said to be similar to those of the neighboring countries because they mostly have the same ingredients. However the one thing that sets them apart is that the Costa Rican cuisine is mostly savory compared to the other Central and South American foods. Fresh fruits and vegetables, beef, and plentiful salads are the staples of Costa Rican cooking. The Costa Rican Core food includes black beans and rice is the backbone of the meal, carrot tomato cabbage salad, roast pork or chicken. The secondary foods include vegetables are mostly in soups and stews with the exception of the following three plantains (fried like chips or patacones like mashed potatoes), corn one of the most favored vegetables (tortillas, corn on the cob roasted or boiled, empanadas, corn pancakes, fries yuka, fruits: papaya, mango, pina, sandia, melon, moras, limons, guayaba, granadilli, aguacates all can be served plain or blended with ice as a refresco. ...read more.

Phase -II (III) This assignment was more of a challenge for me. As we were the first group I am a bit nervous about the presentation. Moreover English is my second language, so it's more peer pressure for me. I got to discover how to work in a group and how to approach people for interview through this assignment. I also got to gain knowledge about a new culture and a chance to compare my culture with the culture about which I just learned. I think all the group members were involved in doing the research assignment. Stephanie helped with getting done the PowerPoint slides and the menu. Fannie somehow managed to get hold of someone from Costa Rica for the interview. Casey got the entire multiple choice question together. Vivian came up with great ideas which helped us get done with the research quickly. I'm glad I got all of them in my group it was great knowing them and working on the research with them. Phase - III Casodo Roasted pork served with black beans and rice, fried plantains, and cabbage, carrot, and tomato salad. Wine Pairings: California- Mirassou Pinot Noir Old World- Joseph Faiveley 2004 Pinot Noir Bourgogne Sopa de Mondogo Hearty soup prepaired with tripe, chayote, potatoes, cilantro, and sazon w/ achiote. Served with rice. Wine Pairings: California- 2007 Banshee Napa Valley Cabernet Sauvignon Old World- Cotes du Rhone Arroz Pollo Fried rice with chicken. Served with black beans, roasted corn on the cob, and cabbage, carrot, tomato salad. Wine Pairings: California- 2008 Sonoma County St. Francis Chardonnay Old World- 2007 Zind-Humbrecht Vin de Table Francais Zind Dessert One of the most common dessert in Costa Rica is Tres Leche. Which is a three layered custard flan. Soaking process involves condensed milk, evaporated milk, and whole milk (hint at the name) and then topped with icing. Tres Leche is the national dessert Sources of Information: Books: Erin Foley, Barbara Cooke, Costa Rica Larissa Banting, Costa Rica Rowland Mead, Costa Rica Sites: http://www.costaricantrails.com/ http://www.criccapital.com/ http://www.costa-rica-guide.com/travel/ http://www.costarica.com/blog/costa-rica-living/ http://www.whatcostarica.com/costa-rica-food.html http://www.vivacostarica.com/costa-rica-information/costa-rica-food.html http://www.globalgourmet.com/destinations/costarica/#axzz13y7qU3yg http://www.ocotalresort.com/costaricainfo/costa_rica_general_information.htm http://www.ncbi.nlm.nih.gov/pmc/articles/PMC2711054/ http://www.everyculture.com/Bo-Co/Costa-Rica.html http://www.buzzle.com/articles/different-cultures-of-the-world.html . ?? ?? ?? ?? 1 ...read more.