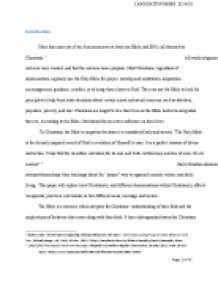 How do Biblical teachings affect Christians behavior and attitudes?

﻿CANDIDATE NUMBER: 3253-011 Introduction More than nine out of ten Americans own at least one Bible, and 86% call themselves Christians.[1] All world religions have sacred scriptures. These scriptures state that the world and the universe were created, and that the universe has a purpose. Most Christians, regardless of denomination, regularly use the Holy Bible for prayer, worship and meditation, inspiration, encouragement, guidance, comfort, or to bring them closer to God. They can use the Bible to look for principles to help them make decisions about certain moral and social concerns; such as abortion, prejudice, poverty, and war. Christians are taught to live their lives as the Bible instructs and guides them to. According to the Bible, God should be an active influence on their lives. To Christians, the Bible is important because it is considered holy and sacred; ?The Holy Bible is the divinely inspired record of God?s revelation of Himself to man. It is a perfect treasure of divine instruction. It has God for its author, salvation for its end, and truth, without any mixture of error, for its content? [2] Each Christian denomination has their own unique interpretation of the Bible. These interpretations shape their teachings about the ?proper? way to approach morals, values, and daily living. This paper will explore how Christianity, and different denominations within Christianity, affects viewpoints, practices, and morals in two different areas; marriage and racism. The Bible is a resource which deepens the Christians? understanding of their faith and the implications of behavior that come along with their faith. It has a distinguished status for Christians because according to their faith, it alone holds God?s special revelation. This topic is worth of investigation as it will demonstrate to what extent a Religious faith can have an active impact on its believers. Marriage and Divorce Christians have four main principles which help guide them through marriage. ...read more.

Different Christian denominations have deviated in terms of the various ways they deal with marital problems. On the whole, the Protestant Churches take the view that Jesus? teachings are ideals which married couples should try to live up to, but there comes a point when the problems faced by some couples force the marriage to end. In these cases, Protestant Churches accept a civil divorce to end a marriage. A divorced man or woman is permitted to remarry. The Roman Catholic Church takes a rather different view to that of other Christian denominations. The words of the Bible are taken literally: once a Christian marriage has taken place the two have become ?one flesh?: the marriage is made by God and cannot be dissolved or ended by any man, as explained previously, by death. Christian Denominational view on Re-marriage Catholic Not permitted except in the case of death of the first spouse or annulment of the first marriage granted by the Church. ?Contracting a new union, even if it is recognized by civil law, adds to the gravity of the rupture [divorce]: the remarriage spouse is then in a situation of public and permanent adultery.? (CCC 2384) Orthodox If a previous marriage ended due to death or ecclesiastical divorce, ?the church will permit up to, but not more than, three marriages for any Orthodox Church. If both partners are entering a second or third marriage, any form of the marriage ceremony is conducted, much more subdued and penitential in character.? (GOAA) Lutheran Accepted. ?Remarriage can be an opportunity to use wisdom gained from the past to create a new relationship of loving commitment and joy.? (ELCA) Method/Wesleyan Accepted. (UMC) Figure 3. Re-marriage (Ethical Views) Source: www.religiousfacts.com[7] The teachings of God are meant to guide couples to a contented marriage. It is the Christian ideal that every couple should strive to live up to their vows to successfully live-out their vocation. ...read more.

the passage which tells us how the Lord at last rose in His might and seized the scourge to drive out of the Temple the brood of vipers and of adders. How terrific was His fight for the world against the Jewish poison.?[10] At the time of Nazi Germany, Germany was a Christian based country. For the sole purposes of Hitler?s racist attitudes, he took the teachings that the Germans were familiar with and manipulated it so that Jews and other minorities may be wiped from Germany. Hitler used what he was taught as a Christian, to influence his behavior and act against the Jews in a violent manner. Many Christians would try to adhere to the teachings of the Bible and Jesus and follow anti-racist behavior as set by the examples and approved by the nature and faith of Christianity. It is the aim of most Christians to imitate Jesus, who in the parable of the Good Samaritan found in the book of Luke says, ?Go and do likewise? (Luke 10:37 KJV). Christianity teaches that all people should be treated as equals. The Biblical teachings about racism instructs Christians to treat one another equally, however, whist some Christians may interpret the teachings as stated in the Bibles, there are Christians in history who have selectively chosen passages to justify their violence for and against racism. Conclusion The Bible is a powerful resource which has great influence on the behaviors of congregates. From the research and investigational methods executed, it can be concluded that Christians, regardless of denomination, practice their doctrine to be closer to God and to achieve certain likeliness as Him. In 1 Peter 1:16 KJV says ?Because it is written, Be ye holy; for I am holy.? Christians use the teachings found in the Bible to influence who they are and to help them to make the right decisions in their everyday living. There are situations such as marriage and racism that Christians refer to the Bible for illumination and understanding. ...read more.