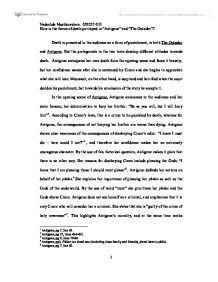 How is the theme of death portrayed in Antigone and The Outsider?

Death is presented to the audience as a form of punishment, in both The Outsider and Antigone. But the protagonists in the two texts develop different attitudes towards death. Antigone anticipates her own death from the opening scene and faces it bravely, but her confidence wanes after she is sentenced by Creon and she begins to appreciate what she will lose. Meursault, on the other hand, is surprised and horrified when the court decides his punishment, but towards his conclusion of the story he accepts it. In the opening scene of Antigone, Antigone announces to the audience and her sister Ismene, her determination to bury her brother: "Be as you will; but I will bury him"1. According to Creon's laws, this is a crime to be punished by death, whereas for Antigone, the consequences of not burying her brother are worse than dying. Antigone shows clear awareness of the consequences of disobeying Creon's edict: "I knew I must die - how could I not?"2, and therefore her confidence makes her an extremely courageous character. By the use of this rhetorical question, Antigone makes it plain that there is no other way. Her reasons for disobeying Creon include pleasing the Gods: "I know that I am pleasing those I should most please"3. Antigone defends her actions on behalf of her philos.4 She explains the importance of pleasing her philos as well as the Gods of the underworld. ...read more.

Further, Meursault experiences irrational moments when he would "feel dreadfully cold... teeth would be chattering uncontrollably"11. Through this imagery, the author successfully conveys Meursault's feeling of terror regarding his future. Meursault is extremely anxious about his own death, occupying his mind with "trying to escape from the mechanism, trying to find if there is a way out of the inevitable"12. He is on the verge of a mental breakdown and to remain sane he makes an "effort to divert [his] thoughts"13. Meursault's reaction is the opposite of Antigone's who initially accepts her consequences with composure. Furthermore, there is a distinction between Antigone's and Meursault's reasons for being sentenced to death; Antigone is punished for disobeying Creon while Meursault is punished for not following society's social norms. Once Antigone starts to consider what she will lose by dying young, there is a change in her attitude towards death. She shifts from acceptance to becoming sad at the thought of "Looking at the sun for the last time"14. She regrets having "had no share in the hymns of [her] marriage procession"15. This conveys Antigone's regret at not having a chance to get a new start in life by getting married. She will also have no chance to do what other women take for granted, create a new life. Antigone reflects upon her life of misery and feels sorry for herself as she would "go unwept by loved ones"16. ...read more.

This oxymoron helps convey Meursault's understanding that people often lie about what they are feeling to be accepted in society, and may pretend to care when they really do not. He also "realized that [he]'d been happy, and that [he] was still happy"23. In his final moments, Meursault wished for "a crowd of spectators at [his] execution and that they should greet [him] with cries of hatred"24 which would represent their honesty as it is obvious that people do not understand him and therefore do not accept him in the society. This once again helps to reinforce Meursault's unnatural behavior towards death and how the majority of people would not understand his logic, which is the reason he is condemned in the first place. Both Meursault and Antigone change their perspectives about facing their deaths as their stories develop. Antigone's attitude changes from acceptance to depression. At first she reasons that her death is noble and heroic but as the play develops her reasoning leads her to feel regret and to long for a life of experiences impossible in the underworld. Meursault's attitude changes from panic to indifference. He is initially stunned by his verdict but eventually reasons his way into acceptance. By comparing Sophocles' Antigone with Camus' Meursault, it can be concluded that there is no single appropriate way to react to one's own death. Both authors also present the idea that the initial reaction may not be the same as the way in which death is finally faced. Words: 1465. ...read more.