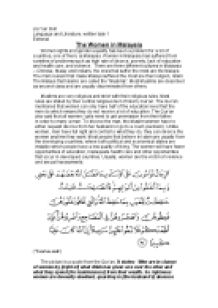 How religion and culture adversely affect women in Malaysia

﻿Jia Yun Goh Language and Literature, written task 1 Editorial The Women in Malaysia Women rights and gender equality has been a problem for a lot of countries, one of them, is Malaysia. Women in Malaysia had suffered from varieties of problems such as high rate of divorce, poverty, lack of education and health care, and violence. There are three different cultures in Malaysia ? Chinese, Malay and Indians, the ones that suffer the most are the Malays. The main reason that made Malays suffered the most are their religion, Islam. The Malays that Islamic are called the ?Muslims?. Most Muslims are described as second-class and are usually discriminated from others. Muslims are very religious and strict with their religious rules. Most rules are stated by their central religious text of Islam, Qur?an. The Qur?an mentioned that women can only have half of the education level that the men do which means they do not receive a lot of education. The Qur?an also said that all women / girls need to get permission from their father in order to marry a man. ...read more.

But if they obey you [once more], seek no means against them. Indeed, Allah is ever Exalted and Grand." (4:34)” (Surat an-nisÄ'). Saying that men are the one that is in charge of women and wealth at home, that women should be obedient to their husband. For the woman that does not follow the rules, you first advise them, if they persist to not follow, forsake them in bed and leave them. But if they obey you, then you should do nothing to them. At the end, it says that Allah is the most worship and admirable. Just this one quote, status of Muslim women is shown clearly to the people that it is very low. Women are treated very poorly by the men due to the rules that have been set up in the religious book, Qur’an. The women are expected to do what the man says and cannot be against them or else will be punished. Most men take advantage of the rules from Qur’an to do anything they want, divorce is one of the main things they do. ...read more.

Women cannot be housewife, mother and at the same time still get a job, this will increase the rate of divorce. So far, only 47% of the women are participated in labour force which means there is still a long way to go for equity of women (Azizan, 2011). MMM sponsorship Project manager Zainuriah Abdul Rahman said that ?We want to enable women to be dynamic in society and to take positive action to improve the quality of their lives? (Hassan, 2012). Mercy Mission Malaysia (MMM) is one of the organizations hoping to continue the push to empower women in Malaysia and Muslim women across the globe (Hassan, 2012). Even though Muslim women have to follow the rules, but Muslim women should not be forced to marry someone they dislike. Also Muslim women should have the right to get a divorce like man does. It is unfair to the women if only men are allowed to get a divorce any time they want when women need to request it from their husband. Education and health care should also be given equally for better job opportunities in the future. ...read more.