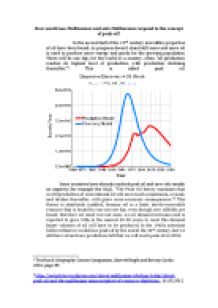 ﻿How would neo-Malthusians and anti-Malthusians respond to the concept of peak oil? In the second half of the 19th century incredible properties of oil have been found. As progress doesn?t stand still more and more oil is used to produce more energy and goods for the growing population. There will be one day, for the world or a country, when ?oil production reaches its highest level of production, with production declining thereafter.?[1] This is called peak oil. Some countries have already reached peak oil and now rely mostly on imports (for example the USA). ?The Peak Oil theory maintains that world production of conventional oil will soon reach a maximum, or peak, and decline thereafter, with grave socio-economic consequences.?[2] This theory is absolutely justified, because ...read more.

(http://www.mnforsustain.org/oil_peaking_of_world_oil_production_parts1&2.htm) Neo-Malthusians (new-Malthusians) ? group of people who feel that there will be a battle for oil. They are afraid that one day we will run out of oil and there wouldn?t be any alternatives for it. They believe that ?the true danger posed by our exploding population is not our absolute numbers but the inability of our environment to cope with so many of us doing what we do.? [3] They think that people should overview their attitude towards consumption of resources, because with growing population more of them is needed and our planet proba-bly won?t be able to provide such a high level of carrying capacity for 8 or 10 billions of people as it was able to provide for 2 or 3 billion of people. ...read more.

One of the main minuses of neo-Malthusians is their pessimistic prediction of doom which ignores innovativeness of human mind. Anti-Malthusians, vice versa, feel that we should see an opportunity as we are running out of oil ? it gives us a goal to invent new types of alternative ener-gy and fuels. They largely rely on better-educated societies, who will be able to find solutions and alternatives to oil. They don?t take into account that oil reserves are running out and it can be the cause of wars, as if we now live in energy insecure era. Things can go very badly for people on the planet, but yet things can turn out well for humanity in the end. ________________ [1] Text book Geography Course Companion, Garrett Nagle and Briony Cooke, 2001, page 85 [2] http://notsylvia.wordpress.com/about-malthusian-ideology-today/about-peak-oil-and-the-malthusian-misconception-of-resource-depletion/, 01.05.2012 [3] http://alfin2100.blogspot.co.uk/2012/01/neo-malthusianism-vs-anti-malthusianism.html, 02.05.2012. ...read more.