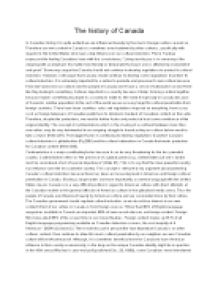 I will argue that Canada should continue to develop some regulations to protect its cultural industries. It is extremely important for a nation to promote and preserve its own culture

﻿The history of Canada In Canadian history it is quite evident we are influenced heavily by the much stronger nations around us. Therefore our own content in Canada is sometimes overshadowed by other cultures, specifically with regards to the United States who have a big influence on our cultural industries. Pierre Trudeau expressed the feeling Canadians have with this co-existence, "Living next to you is in some ways like sleeping with an elephant. No matter how friendly or temperate the beast, one is affected by every twitch and grunt." Some may argue that Canada should not continue to develop regulations to protect its cultural industries. However, I will argue that Canada should continue to develop some regulations to protect its cultural industries. It is extremely important for a nation to promote and preserve its own culture because if we don?t preserve our culture now the people of Canada won?t have a sense of nationalism or won?t feel like they belong to something. Cultures important in a country because it helps to bring a nation together because it gives something to people in a country to relate to. We need it especially in Canada because of Canada?s relative population to the rest of the world we are an easy target for cultural penetration from foreign countries. There have been countless rules and regulations imposed on everything, from issues such as foreign takeovers of Canadian publishers to minimum standard of Canadian content on the radio. Therefore, despite the protections, we need to further foster and protect at least some semblance of the original identity. ...read more.

Globalization is a phenomenon that also threatens Canada?s cultural industries because this allows international influence by other cultures. Globalization is ?increased access to all parts of the world for whatever purposes? (Hiller 68). This concept is relevant to my argument of Canada having to prioritizing to regulate and protect Canadian culture because now more then ever with the World Wide Web helping to connect the world, Canadian culture is beginning to be more diffused with other cultures. Studies show ?The widespread use of new media, new technologies and the Internet is making the culture market more complex, fragmented and more difficult to regulate.? (Statistics Canada 2000). Therefore, although it is very hard for the Canadian government to regulate cultural penetration from foreign sources some type of exclusiveness must be enforced otherwise if Canada waits too long well be left to chase the fast growing world, which is almost impossible with the new technological advances. Canadian culture such as the pop culture industry is benefitting somewhat from globalization because it allows for more exposure but because Canada is a part of the internationalization process in Canada people are also exposed to other cultures, specifically by the United States, who in the past were regulated easily by the 1991 Broadcasting Act but, now because of the World Wide Web becoming more popular, it is extremely hard to regulate what Canadians choose to listen to and what they continue to be influenced by. Canada has made efforts with the broadcast and telecommunications regulator, the Canadian Radio-Telecommunications Commission (CRTC), which ?is bound to respect a Direction from the federal government governing the circumstances under which foreign nationals can be involved in the Canadian broadcasting system? (Couture 9). ...read more.

Thus, in order for our cultural industries to thrive we need to make our own industries appealing to our own people and in the long term hopefully it can be influential and appeal to a broader audience. This can only be possible if we forget about other foreign industries and how they help our economy and focus on how we can fix our own cultural industries by making them feel safe against foreign competition like we have done with CBC for example. CBC represents Canadian identity and people can be proud of it because its homegrown media. Canada should continue to impose regulations on foreign cultural industries because simply if Canada does not we will be overshadowed by the much more influential nations without cost. With a fast growing interest in the Internet we have to be strict with these regulations as well because if we do not our future generations will not have the same opportunities, as the older generations did and that would be because of the fact that we could not sustain our own cultural industry when we did have one, opportunities such as being exposed to the market outside of Canada because we will have lost that privilege only because we were careless with our regulations now. The government might have some conflict because of trade agreements such as, the North American free trade agreement (NAFTA), or the General Agreement on Tariffs and Trade (GATT) but it is the government?s responsibility to continue to maintain the unique Canadian identity Canada has developed through its various cultural industries. ...read more.