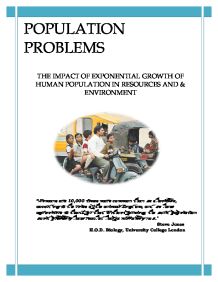 POPULATION PROBLEMS THE IMPACT OF EXPONENTIAL GROWTH OF HUMAN POPULATION IN RESOURCES AND & ENVIRONMENT "Humans are 10,000 times more common than we should be, according to the rules of the animal kingdom, and we have agriculture to thank for that. Without farming, the world population would probably have reached half a million by now." Steve Jones H.O.D. Biology, University College London Kush Vatsaraj XI D ESS SL 2 3/31/2009 THE IMPACT OF EXPONENTIAL POPULATION GROWTH ON RESOURCES & THE ENVIRONMENT Throughout the years, as man discovered newer and better ways to live and improve his life, the world population grew at a higher rate. At first the population was not too great, so as to put much pressure on the environment and was sustainable. But in recent years due to advancement in fields of agriculture, healthcare, transport and communication, etc., the population has started increasing at an exponential rather than a geometric rate, more so after the industrial revolution. Earlier the human population growth was sigmoid but became exponential after the industrial revolution made living conditions better, causing a drop in the crude death rate and increase in the average life expectancy and crude birth rate. As the second graph shows when the population grows exponentially it rapidly increases in a very short span of time. This not only causes overpopulation (overshoot) but also a huge stress is placed on the resources. I am now going to discuss a few of the impacts of this exponential growth on resources and the environment. RISING PRESSURE ON RESOURCES * David Pimentel, Professor Emeritus at Cornell University, has stated that "With the imbalance growing between population numbers and vital life sustaining resources, humans must actively conserve cropland, freshwater, energy, and biological resources. There is a need to develop renewable energy resources. Humans everywhere must understand that rapid population growth damages the Earth's resources and diminishes human well-being." ...read more.

Water resources, critical for irrigation, are under great stress as populous cities, states, and countries require and withdraw more water from rivers, lakes, and aquifers every year. * A major threat to maintaining future water supplies is the continuing over-draft of surface and ground water resources. * Diseases associated with water rob people of health, nutrients, and livelihood. This problem is most serious in developing countries. For example, about 90 per cent of the diseases occurring in developing countries result from a lack of clean water. * The number of people living in urban areas is doubling every 10 to 20 years, creating major environmental problems, including water and air pollution and increased disease and food shortages. * There are water deficits and rapid depletion of the water table in scores of countries due to widespread over drafting beyond sustainable yields. * However, deriving freshwater from desalination of salt water, although very energy-intensive process, is a possible solution. * A number of nuclear powered desalination plants exist, Some argue that there are billions of years of nuclear fuel available, but the high costs of desalination, especially for poor third world countries, make impractical the transport of large amounts of desalinated seawater to interiors of large countries, and the "lethal by product of saline brine that is a major cause of marine pollution when dumped back into the oceans at high temperatures." IMPACT ON LAND RESOURCES Land is the most important resources available to mankind, for without it there would be no food, water or shelter. As the population increases there is more need for land, not only for shelter, but also to grow more food, build hospitals, entertainment complexes etc. The impact on land resources due to population explosion are: * World Resources Institute states that "Agricultural conversion to croplands and managed pastures has affected some 3.3 billion hectares - roughly 26 percent of the land area. ...read more.

* Further, even in countries which have both large population growth and major ecological problems, it is not necessarily true that curbing the population growth will make a major contribution towards resolving all environmental problems. * However, as developing countries with high populations become more industrialized, pollution and consumption will invariably increase. * Technological advances during the last century led to low mortality rates and high birth rates across countries around the world. In addition to this, increased migration and concentration of population clusters in selected locations have put extreme pressure on the surrounding regions. * Scientists are now predicting that unless we bring a healthy balance in the growth rate our environment may face irreversible damage that will jeopardize our future. According to a UN report, the world population is predicted to grow from 6.5 billion to 9.1 billion by 2050. Can you imagine the pressure this will put on our scarce resources? * According to the Millennium Ecosystem Assessment, a four-year research effort by 1,360 of the world's leading scientists commissioned to measure the actual value of natural resources to humans and the world, "The structure of the world's ecosystems changed more rapidly in the second half of the twentieth century than at any time in recorded human history, and virtually all of Earth's ecosystems have now been significantly transformed through human actions." "Ecosystem services, particularly food production, timber and fisheries, are important for employment and economic activity. Intensive use of ecosystems often produces the greatest short-term advantage, but excessive and unsustainable use can lead to losses in the long term. A country could cut its forests and deplete its fisheries, and this would show only as a positive gain to GDP, despite the loss of capital assets. If the full economic value of ecosystems were taken into account in decision-making, their degradation could be significantly slowed down or even reversed." The MA blames habitat loss and fragmentation for the continuing disappearance of species. * So the problem is not simply population growth but finding the right balance between population growth and sustainable development. ...read more.