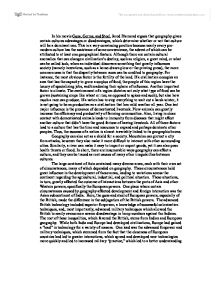 In his movie Guns, Germs, and Steel, Jared Diamond argues that geography gives certain cultures advantages or disadvantages, which determine whether or not that culture will be a dominant one.

In his movie Guns, Germs, and Steel, Jared Diamond argues that geography gives certain cultures advantages or disadvantages, which determine whether or not that culture will be a dominant one. This is a very convincing position because nearly every pre-modern culture has the assistance of some convenience, the advent of which can be attributed to at least one geographical feature. Although there are certain cultural anomalies that can change a civilization's destiny, such as religion, a great mind, or what can be called luck, when an individual discovers something that greatly influences society (namely inventions, such as a horse-drawn plow or the printing press), the more common case is that the disparity between races can be credited to geography. For instance, the most obvious factor is the fertility of the land. If a civilization occupies an area that has the capacity to grow a surplus of food, the people of this region have the luxury of specializing jobs, and broadening their sphere of influence. Another important factor is climate. The environment of a region dictates not only what type of food can be grown (sustaining crops like wheat or rice, as opposed to spices and such), but also how much a race can produce. If a nation has to stop everything to wait out a harsh winter, it is not going to be as productive as a civilization that has mild weather all year. ...read more.

This, combined with the fact that Africans had been exposed to a variety of pathogens and were resistant to many (which was also a function of their geography), led to a large African slave trade, which could be deemed one of the primary reasons for African inequality. The geography of Africa also had another effect on the development and subsequent inequalities in Africa. The arid and harsh land of sub-Saharan Africa makes communication and centralization across Africa fairly difficult, creating many different tribes in Africa. The conflicts between these different tribes stunted national development in Africa, while also creating situations that were easy for imperial Europeans to exploit. All of these reasons stemmed from geography thereby causing an inequality in Africa that still lasts today. Europe's conquering of Central/South America is a good example that supports Diamond's idea that "geography is destiny". Geographically, Central/South America is a continent that is isolated from the rest of the world. Due to this isolation, the inhabitants of this region were extremely vulnerable to outside diseases and had no contact/trade with the more advanced Asian and European empires. They could not acquire more animals for food or travel. After the Spanish conquered Central/South America, many Spaniards immigrated to the New World in search of jobs. The Spaniards then built cattle ranches, silver mines, sugar plantations, and huge estates for other crops. The Spanish crown established the encomienda system, which let the Spanish force the Amerindians into virtual slavery. ...read more.

Cultures that had emerged in a single area and then spread along lines of latitude to nearby regions still hold onto the same values that come into play when dealing with cultural differences now. The spread of cultures and values has very much to do with geography, and today, cultures can often be identified with neighboring lands. For example, the countries of Scandinavia are culturally similar as well as geographic neighbors. Also, different religions can be found in certain regions. For example, Christianity was spread through Christian missionaries, who at the time, could only spread their faith to the places that they visited. In addition, the increasingly limited resources available to us are in increasingly limited places. As an example, the finite amount of fresh water and oil has prompted research towards conservation and alternative energy sources. In the future, geography will still play a major role in determining the world's leading powers. Diamond's idea that "geography is destiny" holds true as everything that happens today is linked to what has already happened in the past, and the events of the past were largely affected by geography. The shifts that have already taken place signal that change is bound to take place in the future. The increased tendency to deal with issues as a global community means that the role of geography will be continually downplayed against the immense capabilities of more and more technology and communication. However, geography is inevitable and unavoidable and in some sense, the instinctual definition of destiny and who we are as the human race. ...read more.