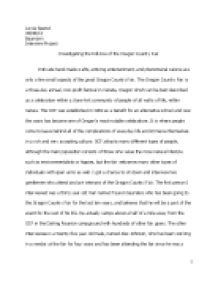 Investigating the Folklore of the Oregon Country Fair

﻿Lorrie Spenst 08/08/12 Baumann Interview Project Investigating the Folklore of the Oregon Country Fair Intricate hand-made crafts, enticing entertainment, and phenomenal cuisine are only a few small aspects of the great Oregon Country Fair. The Oregon Country Fair is a three-day annual, non-profit festival in Veneta, Oregon which can be best described as a celebration within a close-knit community of people of all walks of life, within nature. The OCF was established in 1969 as a benefit for an alternative school and over the years has become one of Oregon?s most notable celebrations. It is where people come to leave behind all of the complications of everyday life and immerse themselves in a rich and very accepting culture. OCF attracts many different types of people, although the main population consists of those who value the more natural lifestyle such as environmentalists or hippies, but the fair welcomes many other types of individuals with open arms as well. I got a chance to sit down and interview two gentlemen who attend and are veterans of the Oregon Country Fair. The first person I interviewed was a thirty year old man named Tauren Saunders who has been going to the Oregon Country Fair for the last ten years, and believes that he will be a part of the event for the rest of his life. He actually camps about a half of a mile away from the OCF in the Darling Reunion campground with hundreds of other fair goers. ...read more.

Camping inside the fair is said to be the best way to experience the fair, but if you don’t have an in at the fair there are several close campgrounds that host the fairgoers. A quarter of a mile from the fair is a campground called Shady Rest, and another quarter mile away are Darling Reunion and Quiet Camp campgrounds. Saunders stayed in the Darling Reunion campground, he describes it as, “a home away from home” he further states that it is the best campground to stay at if you are looking for one big party, and it has vendors of its own and is the best place to stay during fair next to staying in the actual fair.” Everyone decorates their campsites with lights and lots of tapestries, some people even bring teepees to camp in which is a decoration in their own. Many of the camps have names and themes like one camp Saunders described as the red light camp in which they had only red lights all throughout their campsite. He said that his neighbors in the campground called themselves the Krispy Kats and had cat décor and a cut out of two cats which people could stick their heads in for a photo as they’re wandering through. Saunders shared many of the traditions which are practiced within the Darling Reunion campground, such as while walking around the campground or while in your own site it is etticute to say happy fair, its as if you are saying hello and wishing ...read more.

Saunders states, ?The fairgoers are all different from on another but they all share the same spirit for the experience, and I think that?s why it is so fun and you can let yourself go and find your true identity.? For some people, like Saunders the Oregon Country Fair can be viewed as at rite of passage. First you are separated from your normal life. Second you experience the liminal stage in which you partake in the activities of the fair such as: dancing in a drum circle, trying some food you never have, or just wandering and observing all of the sights at the fair. During this liminal stage there is a sense of communitas that is shared among everyone at the fair. The third stage, integration, is when you go back home with a better sense of self. For others, like Johnson the fair is an experience in which they can enjoy the company and entertainment of people just like themselves. The lore of the fair is everywhere because everything is made by the people, for the people and that creates an atmosphere of common ground among everyone. The folk of the Oregon Country Fair are the most important part, I found it unanimous that connecting with people is the greatest take-away from the whole experience. Sources: Alex Johnson [email protected] 503-319-4379 Tauren Saunders [email protected] 503-258-7913 Kupfer, David. "Great Green Gatherings." Whole Earth 108 (2002): 62. Academic Search Premier. Web. 14 Aug. 2012. "Oregon Country Fair 2013." Oregon Country Fair 2013. N.p., n.d. Web. 8 Aug. 2012. <http://www.oregoncountryfair.org/>. ...read more.