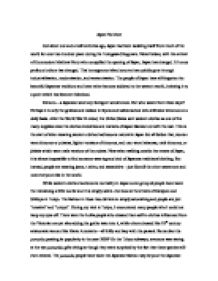 Japan No More - Japanese Culture and the Influence of Western festivals.

Japan No More Just about one and a half centuries ago, Japan had been isolating itself from much of the world for over two hundred years during the Tokugawa Shogunate. Nevertheless, with the arrival of Commodore Matthew Perry who compelled the opening of Japan, Japan has changed. It's once profound culture has changed. This homogenous island country has quickly gone through industrialization, modernization, and westernization. The people of Japan have all forgotten the beautiful Japanese traditions and have rather become addicted to the western world, imitating it to a point which has become ridiculous. Kimono-a Japanese word any foreigner would know. But who wears them these days? Perhaps it is only the geishas and maikos in Kyoto and kabuki actors who still wear kimonos on a daily basis. After the World War II ended, the United States sent western clothes as one of the many supplies since the clothes industries and markets of Japan blanked out with the war. This is the start of when wearing western clothes had become natural in Japan but all before that, women wore kimonos or yukatas, lighter versions of kimonos, and men wore hakamas, male kimonos, or jinbeis which were male versions of the yukata. Now when walking outside the streets of Japan, it is almost impossible to find someone wearing any kind of Japanese traditional clothing. But instead, people are wearing jeans, t-shirts, and sweatshirts-just like all the other westerners and now everyone else in the world. ...read more.

For over 600 years the rooms of these buildings were all Japanese style rooms with floors neatly packed with straw tatami mats. These tatami mats shine its beautiful greenness in wa with the greenery of traditional gardens with trees, bushes, ponds, and bonsai. Tatami is just great. It is not only the light green colour that's pleasant to the eyes but also the smell of the straw, or igusa, is also special. Research has proved that the scent of igusa actually enhances concentration and resulted in better testing grades of children. This is because of the mixture of aroma components of vanillin and phytoncide creating a relaxing smell like vanilla and the fresh smell as though walking in the wood (Morita You). However, recent years looking around the residential areas of Japan almost all of the house are western style homes shapes like the square and triangle on top or the thirty-floor high apartments where all the interiors are fixed with western furniture. All on top of that many of these houses today don't even have a Japanese style tatami room any more and rather use that space to create another bedroom for their child. Japanese traditional architecture has collapsed and has been reconstructed by western homes of steel pillars and wooden flooring. Yes, western home are much more modern and also very strong against the frequent earthquakes in Japan or any other type of natural disasters. ...read more.

We Japanese are, granted, a religiously tolerant people, but there is something odd here that appears nowhere else. Whatever else is to be said about the whole business, one side, the Church, completely repudiates the other side's belief as "heresy." Can the Church be serious in blessing the wed- dings of "nonbelievers"? After all, are not nonbelievers really "headed for damnation"? What meaning can it possibly have to be a "one-day Christian" just for a wedding? Japanese people love the western world. They'd do anything to become just like them whether it takes a price of destroying their own culture. Still, Japanese people don't like gaijins. Being a homogenous society Japanese people still draw a racist line between foreigner and themselves calling foreigners "outsiders" whenever they see one walking down the street, discriminating them just by their looks. This is just ridiculous. No matter how much they love the western world, they cannot accept the people. A myriad of foreigner visits Japan for the beautiful country everyday to get in touch with Japan and its people but the Japanese people do not return but just have them look around the country, let them take photos, and leave straight out. No doubt the Japanese people can't help doing this because many of them know nothing about their own country, traditions, and culture. Japan is simply a mess. But the country is the home of cultural beauty that must never be forgotten. Japan has to do something before the country burns into ashes and dust. ...read more.