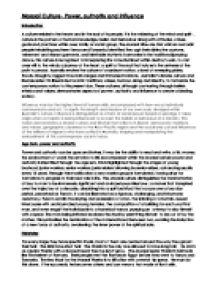 Maasai Culture- Power, authority and influence Introduction A culture resides in the hearts and in the soul of its people, it is the widening of the mind and spirit, culture is the pattern of human knowledge, belief and behaviour along with attitudes, values, goals and practices within ones family or social group. The Maasai tribe are East African nomadic people inhabiting southern Kenya and Tanzania, identified through their distinctive customs, vehement and vibrant garments, and inimitable rhythmic harmonies in the traditional jumping dance, this culture is recognized for interpreting life to be illumined within destiny's web, to cast ones will to the winds, a journey of the heart, a spirit of the soul that truly sets the universe of the path to peace. Australia evokes the culture of a sunburnt nation, a land of sweeping plains, floods, droughts, ragged mountain ranges and immersed horizons, Australia's diverse culture and lifestyle reflect its liberal democratic traditions, values, humour, slang and identity, to formulate the contemporary nation to this present day. These cultures, although contrasting through beliefs ethnics and values, demonstrates aspects of power, authority and influence to create a binding society. Influence may be the highest level of human skills, encompassed with how we as individuals communicate and act, to signify the length and shadow of our own souls, divulged within Australia's culture, influence is ...read more.

The kids have short hair. The Warrior is the only one allowed to have long hair. He starts as a junior Warrior with a shaved head; then he lets it grow. The Maasai senior Warrior's hair looks like the helmet of Romans. Their people met the Romans in Egypt before they went to Kenya and Tanzania. The key ritual for the Maasai Warrior is to kill a lion with a metal-tip spear. He must do this alone. If he succeeds, he becomes a hero and can wear a hat made of lion's skin. Jewellery- power Divulged amongst this diverse international world, ethnic groups are characterized and identified by dress and ornamentation, the Maasai are engulfed with luminous vivid colours that bind into intricate patterns and designs, the enchanting jewellery possess the human eye through its unique composition that is poised and encompassed around the outer surface of the human body, the entanglement of twisted coils, distinctive and variegated embodies around the forearms, the beaded embellishment, collar necklaces that rhythmically manoeuvre to harmonies of the tradition jumping dance, along the head dresses that drape the formation and accent the facial features are widely interpreted throughout this culture. These intricate forms of jewellery withhold a depth of measurement into the history of this culture; each vibrant colour highlights a form of power or symbolizes the force of authority a superior individual dominates. ...read more.

It can be highlighted that there are dances for the celebration when a lion is sacrificed by the warriors, a dance for the blessing of cattle, and dances performed at wedding ceremonies and celebrations. Musical instruments are generally not recognized throughout these performances, the intricate beads engulfed around the outer circumference of the body creates a jingling melody while a manoeuvre of the head and neck are evoked, the pattern formulates a uniform bobbing effect, reinforcing the vibrant atmosphere that is absorbed into the barren environment. Religion Absorbed into the inner heart of this unique culture, the Maasai traditionally center there universe as Gods chosen people, the god Enkai created the world, formulating three groups. The first were the Torrobo, hunting and gathering people of small stature to whom God gave honey and wild animals as a food source, the second were the neighboring Kikuyu, farmers to whom God gave seeds and grains and the third were the Maasai, to whom God gave cattle, which came to earth sliding down a long rope linking heaven and Earth. While the Torrobo were destined to endure bee stings, and the Kikuyu famines and floods, the Maasai received the noble gift of raising cattle. A Torrobo, jealous of the Maasai's gift of cattle, cut the umbilical cord between heaven and Earth, for many Maasai, the center of their world remains their cattle, which furnish food, clothing, and shelter. ...read more.