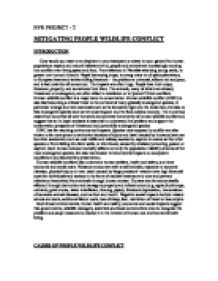 Mitigating People Wildlife Conflict. Human-wildlife conflict (HWC) is also fast becoming a critical threat to the survival of many globally endangered species, in particular to large and rare mammals such as the Sumatran tiger and the Asian lion,

EVE PROJECT - 2 MITIGATING PEOPLE WILDLIFE CONFLICT INTRODUCTION How would you react to an elephant in your backyard or a bear in your garden?As human populations expand and natural habitats shrink, people and animals are increasingly coming into conflict over living space and food. From baboons in Namibia attacking young cattle, to greater one-horned rhinos in Nepal destroying crops, to orang-utans in oil palm plantations, to European bears and wolves killing livestock - the problem is universal, affects rich and poor, and is bad news for all concerned. The impacts are often huge. People lose their crops, livestock, property, and sometimes their lives. The animals, many of which are already threatened or endangered, are often killed in retaliation or to 'prevent' future conflicts. Human-wildlife conflict is a major issue in conservation. Human-wildlife conflict (HWC) is also fast becoming a critical threat to the survival of many globally endangered species, in particular to large and rare mammals such as the Sumatran tiger and the Asian lion, but also to less endangered species such as the snow leopard and the Red colobus monkey. The numerous cases from countries all over the world demonstrate the severity of human-wildlife conflict and suggest that an in depth analysis is essential to understand the problem and support the conservation prospects of threatened and potentially endangered species. HWC has far reaching environmental impacts. Species most exposed to conflict are also shown to be more prone to extinction because of injury and death caused by humans;these can be either accidental, such as road traffic and railway accidents, capture in snares set for other species or from falling into farm wells, or intentional, caused by retaliatory shooting, poison or capture. Such human-induced mortality affects not only the population viability of some of the most endangered species, but also has broader environmental impacts on ecosystem equilibrium and biodiversity preservation. Human-wildlife conflicts also undermine human welfare, health and safety, and have economic and social costs. ...read more.

4. Lion and leopard conflict in India [Asian lion - critically endangered; Leopard - endangered] In India, in the state of Gujarat, in the proximity of Gir National Park and Sanctuary, the Asian lion and leopard use the extensive plantations of sugarcane and mango to find shelter and water and to hunt prey such as buffaloes, cows, pigs and dogs. Several lions are reported to have strayed outside the park boundary and into plantations for more than a week, while leopards have chosen it as permanent habitat and even breed in cultivated fields bordering the edge of the park. Once again, the overlapping of wild animals' home ranges with human settlements has resulted in cattle depredation and attacks on farmers and labourers. The problem in this area is of similar nature to the others described above: the safety of rural people is threatened, livestock depredation is common and the overall ability to address the conflict is weak. 5. Tiger and Asian elephant conflict in India [Tigers - endangered; Asian elephants - endangered] In the Southern Indian state of Karnataka, the Bhadra Tiger Reserve hosts a large number of mammalian fauna as well as a population of 3,000 people. Data collection and surveys performed in the region between 1996 and 1999 provided evidence of resident villagers suffering from a high level of economic impact due to HWC. The overall annual loss due to large feline (tigers and leopards) depredation is reported to be approximately 12% of the total family livestock holding, which is equivalent to 16% of the average annual household income in the region. An interesting detail is that although large carnivores had a considerable negative impact on the cattle population, the villages over compensated the loss with purchases. Besides, elephant damage to crops accounted for an average loss of 14% of the total annual production (0.82 tonnes per family), which in monetary terms is equal to 30% of the average annual household income in the region. ...read more.

There is no single solution to the conflict and every preventative and mitigative strategy should be empirically tested for its cost- effectiveness and possible impact on the ecosystem equilibrium before adoption. The best scenario would imply integrated community development and wildlife conservation promoted by national park managers and supported by local populations. Community-based conservation should give indigenous people the right to limited and sustainable use of natural resources while promoting tolerance towards wildlife, responsible interaction with their natural environment and the recognition if the value of natural heritages. A 2003 researcher proved that rural villagers, who live in proximity to Waza National Park in Cameroon, appreciate nature's intrinsic value and agree with the necessity to protect forests and their wildlife inhabitants for future generations. Their positive attitude towards conservation arises from the use of natural resources such as regulated harvesting of non-timber forest products, the use of waterholes and fishing. Local peoples' participation is now widely advocated in development and conservation, participatory protected area management is becoming increasingly common throughout Africa and the development of a system of returning benefits through resource exploitation is often advocated in multiple areas surrounding the parks. The most sustainable approach should ensure the development of a local economy based on wildlife and revenue collection from nature reserves, as well as a reduction in the dependence of rural communities on agriculture and farming. In order to enhance protected area effectiveness, conservation should be based on sound scientific knowledge, practical local indigenous knowledge and collaboration. Protected areas and the presence of wild animal populations inflict costs on local communities and can erode local support and tolerance. In turn, indigenous people can develop a negative attitude towards reserves and wildlife, exacerbating the conflict and undermining conservation efforts. In order to break this cycle, there is a need to protect rural livelihoods, reduce their vulnerability, and counterbalance losses with benefits and foster community-based conservation. Both people and wildlife suffer tangible consequences and different stakeholders involved should commit themselves to tackle and resolve the conflict in the near future. ...read more.