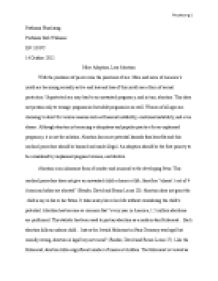 ﻿Phuektong Patthama Phuektong Professor Bob Williams EN 110 FC 14 October 2012 More Adoption, Less Abortion With the pressures of peers come the pressures of sex. More and more of America?s youth are becoming sexually active and less and less of this youth use a form of sexual protection. Unprotected sex may lead to an unwanted pregnancy, and in turn, abortion. This does not pertain only to teenage pregnancies but adult pregnancies as well. Women of all ages are choosing to abort for various reasons such as financial instability, emotional instability, and even shame. Although abortion is becoming a ubiquitous and popular practice for an unplanned pregnancy, it is not the solution. Abortion has more potential hazards than benefits and this medical procedure should be banned and made illegal. An adoption should be the first priority to be considered by unplanned pregnant women, and doctors. Abortion is an inhumane form of murder and immoral to the developing fetus. This medical procedure does not give an unwanted child a chance at life, therefore ?almost 1 out of 4 American babies are aborted? (Bender, David and Bruno Leone 28). Abortion does not grant the child a say in his or her future. It takes away his or her life without considering the child?s potential. ...read more.

Examples may include: rent, utilities, maternity clothing, food, prenatal vitamins and any other medical expenses not covered by [her] insurance? (Adoption vs. Abortion vs. Parenting). As mentioned before, a mother is giving up her child for the better of the child. If the mother decides to put the baby up for adoption, the mother only wants what is best. She only wants to give the child a life where the child can grow up in a healthy environment. Women who are not financially stable are more likely to be in this situation. Their mindset is that children are very expensive to raise and it is true. Adoption relieves the cost of that, permitting the mother to go through birth instead of aborting her own child. Openness benefits all involved. It allows an adopted child to go on with life and development without mysteries as to their birthparents, brothers or sisters, health history, and genetic roots. It solidifies the adopted child?s relationships, as they know that the people who are raising them are their true life-long parents. They will feel more secure in their family and home, while having the comfort of other special people in their life, from aunts and uncles to birthparents. Without unnecessary mysteries or secrets for all parties, lives can go on more peacefully. ...read more.

Mothers will go through a depression because of this. They will never know what their child could have looked like or how their child would have grown up. They cannot change an abortion and this decision is set in stone. Mothers will grieve for their permanent unborn baby and this has caused serious pain to their mental health. Thus, abortion is more deleterious than beneficial and should be banned. In conclusion, abortion is a caustic process that yields more negative effects than positive. It is a procedure that needs to be prohibited in the United States. This is important because, as previously stated it is immoral and wrong. It is not right to end an innocent child?s life for the mother?s sake. The child needs a voice and that voice is saying no to abortion. A substantial amount of children are being killed each year, 1.5 million in America. Those children are the future of America. The mothers will pass away in the future and those children will be the new mothers or fathers. These unborn children hold the potential of this country and their lives should not be taken away. For example, the mother?s child could grow up to be a prominent figure who made an impact on the world. It is unjust to abort their lives and take away their choice. These children need to be given a chance and the unborn need to be heard. ...read more.