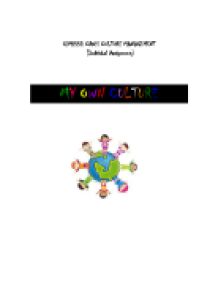 My Own Culture - growing up in Malay culture.

GSM5550 CROSS CULTURE MANAGEMENT (Individual Assignment) MY OWN CULTURE Symbols, Rituals, Role Models, Values and Assumptions. I was born in the small family. I was the only daughter among four siblings. As children, we were tight by the rules set by my parents. As a child, i must commit with my parents order. Among the things that I remember most so far is the way I dress up. My daily wear is 'baju kurung', this is because my mother did not want me to dressed up just like my brothers. For her 'baju kurung' is a symbol of Malay women and she wants me to look polite. I wear 'baju kurung every day until i finished my secondary school. I change the way I dress accordingly when I go to college. Then I realize that what my parents do is they want me to commit with the religious, until now I never wear something that against our religion. But nowadays, most of parents did not really care how they want their child being dress as long it is still in proper manner and not against their religion. Everything can change; even some rituals, traditions and customs can changes depends on how we adapt the changes. The changes happen because of globalization and modernization of culture, values and believes. From kids, we were synonyms by Malay rituals, practices or even values. All the traditions and customs were set by the elders in the family especially parents, grandparents and also religious teacher who had conveyed us. Here are some of the values, practices and also rituals that important in my family that my parents allow me to pass on my children. 1. RESPECT FOR ELDERS. Shaking Hands The host may shake hands with the guest using both his hands, rather than in the Western manner with the right hand. The grip of hands is gentler and the shaking less vigorous than in the Western style. ...read more.

A typical verse commonly used is, 'it has come to our knowledge that you have a beautiful flower in your garden. Would it be possible for us to pluck the flower for our son? Has anyone owned that flower?' If the receiving party accepts the proposal, then the wedding would be arranged. However, modern Malays today forego the traditional Malay proposal done in poems. The couples choose to decide between them if they want to get married and then leave the formalities of the proposal and wedding arrangement to the parents. From my own experience, my mother in law doing her 'merisik' through one phone calls. They decide to do directly the engagement ceremony without 'merisik' ceremony because we know each other for several years. It was a direct proposal without indirectness. 6. EAR PEIRCING When I was 5 years old, my parents do the ceremony of piercing of the ear-lobes. It has no religious significance whatsoever, and is thus one of the traditional customary practices (adat). Basically, the ceremony is done to girls between the ages of about five and ten years. With the arrival of close relatives, guests and relatives, who may bring gifts, food is served, the standard fare being specially prepared rice (nasi minyak) and chicken or beef curry, and a syrup drink. Upon the completion of the feast, supplications (doa selamat) are read by a religious official, such as a imam or lebai, if one is present or by anyone else who may be able to do so. Following the feast the invited guests depart. The actual ear-piercing is done either before or after the feast. Traditionally a woman pierced the ears of the young girl using a type of thorn, and the actual process taking no more than a few seconds. With modernisation, the traditional manner of doing the ceremony 'Bertindik Telinga' is rare, and in most instances the piercing of the years is done at jewellery shops or at commercial complexes. ...read more.

Food: Previous years, we only ate rice serve with other dishes for our daily meal. For breakfast, we will have a 'nasi lemak', 'cucur tepung', 'lempeng' or other traditional 'kuih'. Today, we still cook for our family but because of time consuming, we start to cook instant or frozen food. For example, in the market we can have instant 'cucur tepung' or even frozen fried chicken. Besides that, we start to go to fast food restaurant. This is because the impact of westernization in our culture. We want to dress like western people, we want to eat what they eat and we also want to have a life like them. All of these changes will have an impact on our own culture. Youngster today, sometimes don't even know about local and traditional food. As an elder generation, we should try to remains our own traditional practices even in a modern ways. As a conclusions, the young generation, being vulnerable, is easily influenced by the negative development in the west, and with adoption of new (western) values, they feel they are in confrontation with their parents who still cling to the set of traditional values. The nature of this confrontation is translated into, or is expressed by the youths getting themselves involved in a variety of anti-social activities. Irrespective of the pace of development, the family institution has to be strengthened; its values have to preserved and instilled. As for the Malays in Malaysia, they are aware of the changes that occur around them, and of the negative impacts such changes have on their family system. However, as devout Muslims, they always fall back to their religion for guidance. The majority of the Malays are not easily influenced by anti-family movements with their radical proposal for family alternatives in the west. They are also not easy to fall prey to modern western family values, which are mostly in contradiction to the teachings of Islam. But we must remember that, any changes happen still based on their values and believes. ?? ?? ?? ?? GSM5550 Cross Culture Management ...read more.