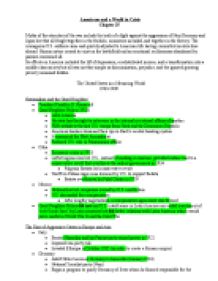 Notes on the USA and WW2.

﻿Americans and a World in Crisis Chapter 25 Myths of the atrocities of the war include the truth of a fight against the aggression of Nazi Germany and Japan but that all fought together in the foxhole, minorities included, and together in the factory. The courageous U.S. soldiers came and quickly adjusted to American life having committed no atrocities abroad. Human nature ceased to exist on the battlefield and an emotional recklessness abandoned by passion consumed all. Its effects on America included the lift of depression, a redistributed income, and a transformation into a middle class society but all was not that simple as discrimination, prejudice, and the ignored growing poverty remained hidden. The United States in a Menacing World 1933-1939 Nationalism and the Good Neighbor 1. President Franklin D. Roosevelt 2. Good Neighbor Policy (1933) 1. Latin America 2. No state has the right to intervene in the internal or external affairs of another 3. FDR withdrew the last U.S. troops from Haiti and the Dominican Republic 4. American bankers loosened their rip on Haiti?s central banking system 5. It renounced the Platt Amendment 6. Reduced U.S. role in Panamanian affairs 1. Cuba 1. Economic crisis in 1933 2. Leftist regime rose but U.S., instead of sending in marines, provided indirect aid to a conservative revolt that overthrew the radical government in 1934 1. Fulgenio Batista led conservative revolt 1. Tariff on Cuban sugar cane lowered by U.S. to support Batista 1. Batista overthrown by Fidel Castro in 1959 1. Mexico 1. Nationalized oil companies owned by U.S. and Britain 2. U.S. demanded fair compensation 1. After lengthy negotiations, a compensation agreement was formed 1. Good Neighbor Policy did not end U.S. interference in Latin America nor ended resentment of ?rich Uncle Sam? by Latin countries but did better relations with Latin America which would prove useful in World War II and the Cold War The Rise of Aggressive States in Europe and Asia 1. ...read more.

Power of Government 1. With the production of so much industry, the government went hand-in-hand with business to keep manufacturing at the top 1. Concentration of power deemed the ?imperial presidency? a century later 2. Growing of the ?military-industrial complex? The War Economy 1. Government spent more than $320 billion to defeat Axis powers 1. Results 1. Massive expenditures ended the Depression 2. Stimulated an industrial boom 3. Created 17million new jobs 4. Jobs for women, elderly, teens, hearing-impaired, dwarfs (they all had different purposes and abilities that helped them in their field of work) 5. Raised real wages by 50% 1. Geographical funding 1. Government produced nearly $40 billion into the West 2. Southern funding produced more jobs in textile, oil and natural gas, chemical, and aluminum industries 3. South?s industrial capacity increased by 40% 1. The war years produced the only significant 20th century shift in the distribution of income toward greater equality 2. Agribusiness greatly improved due to consumers 3. Labor Unions recruited more members from their ?maintenance of membership? rule created by the NWLB to automatically enroll workers into unions 1. Members agreed not to strike and to limit wage increases to 15% 2. Some broke no-strike pledge ?wildcat strikes? not authorized by union leaders and short lived 1. United Mine Workers (UMW) 1. John L. Lewis - More than half-million coal-field workers 1. Miners won wage concessions 1. Led to Smith-Conally War Labor Disputes Act of 1943: enabled the president to take over any facility where strikes interrupted war production (FDR vetoed it but Congress passed it over his veto) 1. Inflation 1. Increased about 2% per month (increased spending power and scarcity of consumer goods) 2. Congress gave president power to control wages, prices, and rents (OPA helped inflation slow dramatically) 1. OPA 1. Besides controlling inflation, set up rationing to conserve scarce materials 1. Gas, coffee, sugar, butter, cheese, meat 2. ...read more.

Churchill and FDR called for free, democratic elections there 2. People claimed FDR ?gave away? eastern Europe Victory in Europe 1. Rhine (1945) 1. American troops surrounded Germany?s industrial heartland 1. Elbe River 1. Americans met the Russians 2. April 25, 1945 1. Hitler commits suicide 1. April 30, 1945 1. Victory Day in Europe! V-E Day 1. (April 12, 1945) 1. Just before victory, FDR died =( 1. Vice President 1. Truman was left with little knowledge of all the events that had taken place 2. Lashed at Soviet Union, threatening to end lend-lease aid if Russians did not provide free elections 3. Stalin did not keep the promises he made at Yalta 1. Potsdam 1. Truman, Stalin, Churchill could not agree on the demilitarized Germany 2. Major post-war military problems left to Council of Foreign Ministers to deal with later The Holocaust 1. Americans found out about massacre in 1942 but wouldn?t believe all the reports on it 2. American Jews plead military to bomb death camps and railroads leading to them but nobody listened 3. No rescue attempt to save Jews was made by the U.S. 1. War Refugee Board 1. Was able to save lives of a few Jews and non-Jews The Atomic Bombs 1. Battles against Japan 1. Iwo Jima 1945 Early 2. Okinawa 1945 June 1. Japanese Cabinet showed no sign of ending the war even though US bombed daily 2. First Bomb 1. Almagordo in mid-July successful nuclear explosion (test) 2. At Potsdam, Truman threatened the Japanese if they did not end the war by August 3, they would be bombed with the Atomic Bomb 3. Enola Gay dropped uranium bomb on Hiroshima (August 6) 4. Stalin declared war on Japan on August 8 and American threats resumed if Japan did not surrender 5. August 9, second bomb dropped on Nagasaki 1. August 14, 1945 War with Japan over 1. Formally over on September 2, 1945 1. Critics argue, was use of the bomb necessary or even humane (?total war? even against innocent civilians)? The world may never know. Dun dun dun! ...read more.