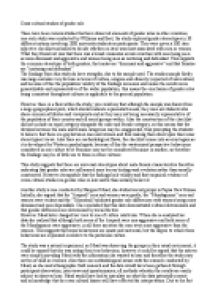 ﻿Cross cultural studies of gender role There have been various studies that have observed elements of gender roles in other countries, one such study was conducted by Williams and Best, the study explored gender stereotypes in 30 different nations involving 2800 university students as participants. They were given a 300 item adjective checklist and asked to decide whether an item was most associated with men or women. What they found out was that there was a broad consensus across countries with men being seen as more dominant and aggressive and women being seen as nurturing and defendant. This supports the common stereotype of both genders, that males are ?dominant and aggressive? and that females are ?nurturing and defendant?. The findings from this study do have strengths, due to the sample used. The studies sample firstly was large and also very diverse in terms of culture, religion and ethnicity (expected of universities) and because of this the population validity of the findings increases and makes the results more generalizable and representative of the wider population, this means the conclusion of gender roles being consistent throughout cultures is applicable to the general population. ...read more.

This study suggests that there are universal stereotypes about male-female characteristics therefore indicating that gender roles are influenced more by our biology and evolution rather than socially constructed. However its arguable that the findings lack validity and that empirical evidence of cross-cultural studies on gender roles is less useful than initially believed. Another study is one conducted by Margaret Mead, she studied social groups in Papua New Guinea. Initially, she argued that the ?Arapesh? men and women were gentle, the ?Mundugumor? men and women were violent and the ?Tchambuli?exhibited gender role differences with women being more dominant and men dependable. She concluded that this date demonstrated cultural determinism and that gender differences are determined by social factors. However Mead later changed her view to one of culture relativism. When she re-analysed her data she realised that although both sexes of the Arapesh were non-aggressive and both sexes of the Mundugamor were aggressive, in all three societies the men were more aggressive than the women. ...read more.

However, there is further evidence to support the assumption that gender roles are not consistent worldwide, Antonia Young carried out a study on the unusual gender roles in Albania. She found a group called the Albania virgins who were born into families which lacked a male presence and thus adopted the male role, committed to being a virgin and dressed and acted as men. The society accepted them as male and they were admitted to all male clubs and social groups. This suggests that societies create gender roles based on the needs of their society/culture and therefore shows that genders do vary across cultures. In conclusion, cross cultural studies help us to establish whether nature or nurture has the greater influence over gender roles. Both Mead and Young's studies imply that nurture and social influences have a greater influence on gender roles, however evidence from William and Best lies on the nature side of the debate by indicating that our biology is more dominant. ...read more.