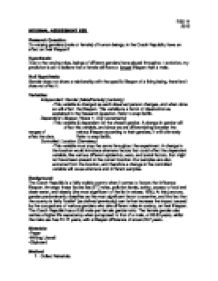 Plan for an investigation in to the link between gender and life expectancy in the Czech Republic.

ESS 11 2012 INTERNAL ASSESSMENT ESS Research Question: Do varying genders (male or female) of human beings, in the Czech Republic, have an affect on their lifespan? Hypothesis: Due to the varying roles, beings of different genders have played throughout evolution, my prediction is set to believe that a female will have a longer lifespan than a male. Null Hypothesis: Gender does not share a relationship with the specific lifespan of a living being, therefore it does not affect it. Variables: Independent: Gender (Male/Female) (certainty) -This variable is changed as each observed person changes, and when done so will affect the lifespan. ...read more.

A change in the location would introduce alternate factors that could affect the dependent variable, like various different epidemics, wars, and social factors, that might not have been present in the current location. Our samples are also extracted from the location, and therefore a change in the controlled variable will cause alternate and different samples. Background: The Czech Republic is a fairly stable country when it comes to factors that influence lifespan. Amongst these factors lies STD rates, pollution levels, safety, access to food and clean water, and obesity (the most significant of the list in values; 15%). At this juncture, gender predominantly classifies as the most significant factor to examine, and the fact that the country is fairly "stable" (as defined previously) ...read more.