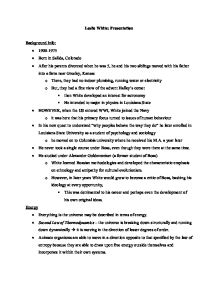 Presentation on Leslie White. In his new quest to understand why peoples behave the way they do he later enrolled in Louisiana State University as a student of psychology and sociology

Leslie White: Presentation Background Info: * 1900-1975 * Born in Salida, Colorado * After his parents divorced when he was 5, he and his two siblings moved with his father into a farm near Greeley, Kansas o There, they had no indoor plumbing, running water or electricity o But, they had a fine view of the advent Halley's comet * then White developed an interest for astronomy * He intended to major in physics in Louisiana State * HOWEVER, when the US entered WWI, White joined the Navy o it was here that his primary focus turned to issues of human behaviour * In his new quest to understand "why peoples behave the way they do" he later enrolled in Louisiana State University as a student of psychology and sociology o he moved on to Columbia university where he received his M.A. a year later * He never took a single course under Boas, even though they were there at the same time. ...read more.

o The process of life can be described in terms of energy, also. A living organism is a structure through which energy flows, entering the system at higher potentials and leaving it at lower potentials. * Much like the water wheel, a living organism is a mechanism that is operated by the downward flow of energy. * As energy is transformed, it loses its value. Thus what is taken from the environment decreases as it is transformed. * Living things are means of stopping, or even reversing the cosmic drift toward maximum entropy (death) o Maintenance of life is achieved by offsetting the entropy produced by the very process of living with negative entropy obtained from the environment, by "sucking orderliness out of the environment" o Obtaining more negative entropy from the environment than positive entropy allows us to evolve. * we're utilizing increasing amounts of energy as it flows through living systems to build more complicated structures, rather than merely trying to MAINTAIN the vital process * IE. ...read more.

He references Simpson (The Meaning of Evolution) "a change that seems often to be involved in [biological evolution] is increase in general energy or maintained level of vital processes...the metabolic system of reptiles has a low vital minimum..." . He finishes with comparing the energy levels between mammals, animals and birds. Extension of the Life Form * The life process extends itself two ways o the multiplication of numbers through reproduction (qualitative) o development of higher forms of life (quantitative) * The lower the form of life, the greater tendency towards self-expansion in a quantitative manner (fruit flies) * The highly developed the life form, the less tendency toward numerous offspring (dolphins) * Man is always occupied with adjustment to and control over his environment, and with competition with other species for means of existence, survival and expansion. To do all of this requires energy. The organs of the body is used in process of survival, but ultimately, man alone possesses an elaborate extra-somatic mechanism, which involves the traditional organization of tools, customs, languages, beliefs, called culture. * Q#2: Why is culture a thermodynamic system? o Culture is an organization of things in motion, a process of energy transformations. ...read more.