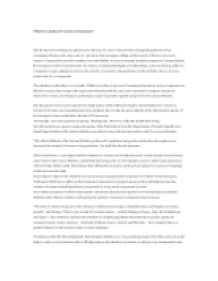 Status of women in business in Slovakia. While more than 37 percent of managerial positions in top companies are filled by women, they occupy only 15 percent of board positions, and just 10 percent of company boards are chaired by women

What is a status of women in business? The EU has been working on a plan to pave the way for more women to take managerial positions in top companies Europe-wide, since only 13.7 percent of top managers sitting on the boards of firms in 2011 were women. Compared to 2010 the number rose only slightly, by just 1.9 percent, despite an appeal by Viviane Reding, the European Union's Commissioner for Justice, Fundamental Rights and Citizenship. Last year Reding called on companies to sign a pledge to increase the number of women in top positions, but the initiative has so far been joined only by 24 companies. The situation in Slovakia is very similar. While more than 37 percent of managerial positions in top companies are filled by women, they occupy only 15 percent of board positions, and just 10 percent of company boards are chaired by women, according to a preliminary report on gender equality prepared by the Labour Ministry. ...read more.

Statistics show that in countries with quotas the number of women in companies has increased. "The lack of women in top jobs in the business world harms Europe's competitiveness and hampers economic growth," said Reding. "This is why several EU member states - notably Belgium, France, Italy, the Netherlands and Spain - have started to address the situation by adopting legislation that introduces gender quotas for company boards. Some countries - Denmark, Finland, Greece, Austria and Slovenia - have adopted rules on gender balance for the boards of state-owned companies." Porub�nov� told The Slovak Spectator that Reding's initiative is a very promising step for the future since it would help to realise several measures that will help improve the situation of women working in top management roles. She explained that there could be several reasons for the lack of women in leading positions, including the so-called 'glass ceiling', i.e. ...read more.

"These data do not refer to discrimination against women in the area of pay, but only generally indicate in which areas and in which positions men are paid better than women," Burianov� told The Slovak Spectator. Though the Antidiscrimination Act stipulates that men and women should have the same salary conditions, the first differences between their earnings appear right after they enter the labour market in their first jobs. These differences reach a peak between the ages of 35 and 44, then gradually start to diminish, according to the Platy.sk survey. The factors influencing the differences between the salaries of men and women are complex and varied, according to Pietruchov�. She adds that the data confirm salary discrimination against women, not only in different positions where employees working in 'feminised sectors' generally earn less, but also in essentially equivalent positions. Burianov� said that the differences in salaries are affected not only by gender, but also by educational attainment, experience, company size and also the regions where people work. ...read more.