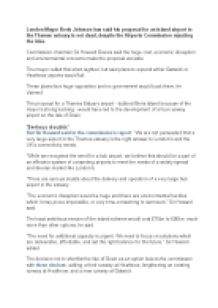 ﻿London Mayor Boris Johnson has said his proposal for an island airport in the Thames estuary is not dead, despite the Airports Commission rejecting the idea. Commission chairman Sir Howard Davies said the huge cost, economic disruption and environmental concerns made the proposal unviable. The mayor called this short-sighted, but said plans to expand either Gatwick or Heathrow airports would fail. These plans face huge opposition and no government would back them, he claimed. The proposal for a Thames Estuary airport - dubbed Boris Island because of the mayor's strong backing - would have led to the development of a four-runway airport on the Isle of Grain. 'Serious doubts' But Sir Howard said in the commission's report: "We are not persuaded that a very large airport in the Thames estuary is the right answer to London's and the UK's connectivity needs. ...read more.

'Gathering dust' Sir Howard's commission was set up by the government to consider ways of expanding airport capacity. The final report is expected next summer, after the general election. Mr Johnson said: "In one myopic stroke, the Airports Commission has set the debate back by half a century and consigned their work to the long list of vertically filed reports on aviation expansion that are gathering dust on a shelf in Whitehall. "Gatwick is not a long-term solution and [Sir] Howard Davies must explain to the people of London how he can possibly envisage that an expansion of Heathrow, which would create unbelievable levels of noise, blight and pollution, is a better idea than a new airport to the east of London that he himself admits is visionary, and which would create the jobs and growth this country needs to remain competitive." ...read more.

He said Gatwick's case for another runway offered the cheapest, quickest and most low risk solution to the urgent need to expand airport capacity. However, Heathrow's chief executive John Holland-Kaye said his airport was now in pole position for expansion. "We have always agreed with the mayor that Britain needs a successful hub airport to compete in the global race for jobs and growth. Heathrow is now the only hub left in the race," he said. "We would like to work with the mayor to deliver Heathrow expansion in a way that benefits the whole country while reducing noise impacts for local people compared to today." British Airways, the biggest operator at Heathrow, said: "We've always said that there was no economic case for a Thames estuary airport so it's no surprise that the Davies Commission, after a thorough investigation, has ruled it out." ...read more.