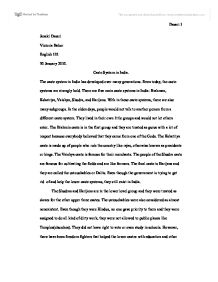 Janaki Dasari Victoria Baker English 101 30 January 2010. Caste System in India. The caste system in India has developed over many generations. Even today, the caste systems are strongly held. There are five main caste systems in India: Brahman, Kshatriya, Vaishya, Shudra, and Harijans. With in these caste systems, there are also many subgroups. In the olden days, people would not talk to another person from a different caste system. They lived in their own little groups and would not let others enter. The Brahmin caste is in the first group and they are treated as gurus with a lot of respect because everybody believed that they came from one of the Gods. The Kshatriya caste is made up of people who rule the country like rajas, otherwise known as presidents or kings. The Vaishya caste is famous for their merchants. The people of the Shudra caste are famous for cultivating the fields and are like farmers. The final caste is Harijans and they are called the untouchables or Dalits. ...read more.

There are also different languages in India. The top most languages are Hindi 41%, Bengali 8.1%, Telugu 7.2%, Marathi 7%, Tamil 5.9%, Urdu 5%, Gujarati 4.5%, Kannada 3.7%, Malayalam 3.2%, Oriya 3.2%, Punjabi 2.8%, Assamese 1.3%, Maithili 1.2%, other 5.9%. Different state speaks different languages. I grew up in Andhara Pradesh and I speak Telugu. When I was in high school, I couldn't understand all of these caste systems. My mother was somewhat educated and she understood that there are no differences in people. However, my grandparents strictly believed in the caste system and they won't let my friends to enter into my house if they were from a different caste. I always felt very ashamed to invite them to my house. But when I went to their house, their families treated me as their family member and would even offer me dinner sometimes. I used to fight with my grand parents almost every day to ask them not to treat other people impolitely just because they are part of a different caste system, but they would not listen to me. ...read more.

Even Harijans are becoming more educated and competing with others in all aspects. The Indian government has also generated many incentive programs for Harijans and all of the other lower caste people. Kumari Mayawati, who is Harijan, was elected as prime minister of Utter Pradesh since 1995 even though she was from such a lower class; she was also elected for four straight years, which shows that with some governmental aid or even from the aid of certain people, the populations that belong to the lower class in India can have a lot more opportunities. Because of these opportunities, the huge gap between the rich and the poor and can come a little closer and this can have benefits on the caste systems as well, once people realize that it does not matter what caste some one is from and that it is how much work he or she has put in that matters. However, there are still some tensions between the upper and lower classes and the tensions have to change so that everyone is treated with the respect that they deserve, no matter what caste system or a class. ...read more.