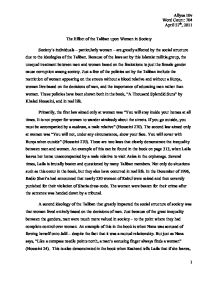 The Effect of the Taliban upon Women in Society

The Effect of the Taliban upon Women in Society Society's individuals - particularly women - are greatly affected by the social structure due to the ideologies of the Taliban. Because of the laws set by this Islamist militia group, the unequal treatment between men and women based on the limitations to just the female gender cause corruption among society. Just a few of the policies set by the Taliban include the restriction of women appearing on the streets without a blood relative and without a Burqa, women live based on the decisions of men, and the importance of educating men rather than women. These policies have been shown both in the book, "A Thousand Splendid Suns" by Khaled Hosseini, and in real life. Primarily, the first law aimed only at women was "You will stay inside your homes at all times. ...read more.

The women were beaten for their crime after the sentence was handed down by a tribunal. A second ideology of the Taliban that greatly impacted the social structure of society was that women lived entirely based on the decisions of men. Just because of the great inequality between the genders, men were much more valued in society - to the point where they had complete control over women. An example of this in the book is when Nana was accused of forcing herself onto Jalil - despite the fact that it was a mutual relationship. But just as Nana says, "Like a compass needle points north, a man's accusing finger always finds a woman" (Hosseini 24). This is also demonstrated in the book when Rasheed tells Laila that if she leaves, he can place blame on her and the Taliban would take his word over hers - regardless if it was truth or not. ...read more.

All schools for girls will be closed immediately" (Hosseini 271). As a dominant leader within a family, the father must have the proper education to earn a living and support the family. This prioritization of men's education over women's was demonstrated when there were 236 school-related attacks on female schools in Afghanistan in 2007. In addition to this, several schoolgirls and teachers of these schools have been continuously subjected to acid attacks by Taliban members. In August 2010, blood tests proved that the mysterious mass sicknesses spread throughout several Afghan girls' schools were caused by powerful poison gas. All in all, the social ideologies within a society - whether dealing with gender preference, race, and other influential factors - contribute greatly to the individual's role in society. In the field of social ideology of the Taliban, it is proven that by the gender-discriminating laws and regulations, women are unequal to men in society in a sense that they are harshly affected by the Taliban rule. ...read more.