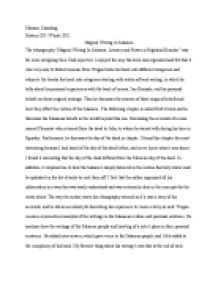 The ethnography Peter Wogan's Magical Writing In Salasaca: Literacy and Power in Highland Ecuador was far more intriguing then I had expected.

﻿Marissa Cabading History 205 / Winter 2011 Magical Writing In Salasaca The ethnography ?Magical Writing In Salasaca: Literacy and Power in Highland Ecuador? was far more intriguing then I had expected. I enjoyed the way the book was organized and felt that it was very easy to follow because Peter Wogan broke his book into different categories and subjects. He breaks the book into categories starting with witchcraft and writing, in which he talks about his personal experiences with the book of names, San Gonzalo, and his personal beliefs on these magical writings. Then he discusses the sources of these magical beliefs and how they affect the culture of the Salasaca.. The following chapter is called God?s book and he discusses the Salasacas beliefs in the world beyond this one. Discussing the accounts of a man named Clemente who returned from the dead to Julia, to whom he stayed with during his time in Equador. Furthermore, he discusses the day of the dead in chapter. I found this chapter the most interesting because I had heard of the day of the dead before, and never knew what it was about. ...read more.

Lastly, the images he put throughout the book were well placed and aided in the writing to complete each chapter. I found numerous ideas that I found very relevant to this course. I feel that I have learned a vast amount of information on the Salasca?s culture in Latin America in the ways of writing. In the chapter of weaving and writing, he discusses the equation between writing and weaving and how many tourists would come and ask what did their weaving?s mean? Seeing the pictures of the intricate weavings and how the Salasacas prayed to the mountain site for improvement in writing, weaving, and improvements in other tasks demanding fine hand coordination, it truly showed how highly important this was to their culture. Relating this back to the course I can truly see how there is not just oral accounts of the histories that are in the cultures in Latin America. It inspired me when reading about the arrangements of living that Wogan endured, and how it changed his outlook on the way he raised his family. ...read more.

Or was he comparing and contrasting this as a hypothetical example. I was very interested in this chapter when discussing the lives of children and the need to be registered to feel as though they exist. He weaved this along with his story of his trip to the witches house to get his named erased from the book. Another question I ended with was that in the end of the book when he began to discuss book that?s I had never heard of. Such as, One Hundred Years of Solitude, which I feel he was trying to use to compare, but it only added confusion to my understanding. Within that my final question would be to what these books he referenced to had to do within his ethnography and if upon reading them I could further my comprehension of his book. Overall, this book was a excellent choice to read and it gave me a small taste into the culture of the Salasaca, and made me want to learn more about their overall culture, not just about the different writing?s in this culture. ...read more.