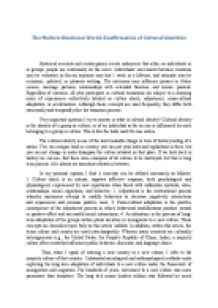 ﻿The Multicivilizational World: Reaffirmation of Cultural Identities Historical accounts and contemporary events underscore that either as individuals or in groups, people are continually on the move. Individuals' movements between countries may be voluntary or forced, sojourns may last 1 week or a lifetime, and rationale may be economic, political, or pleasure seeking. The outcomes may influence present or future careers, marriage partners, relationships with extended families, and leisure pursuits. Regardless of outcome, all who participate in cultural transitions are subject to a dizzying array of experiences collectively labeled as culture shock, adjustment, cross-cultural adaptation, or acculturation. Although these concepts are used frequently, they differ both structurally and temporally face the transition process. ...read more.

If we look back in history we can see, that there were examples of all culture to be destroyed, but this is long term process. All cultures are somehow related in between. In my personal opinion I find 4 concepts can be defined summarily as follows: 1. Culture shock is an intense, negative affective response, both psychological and physiological, experienced by new expatriates when faced with unfamiliar symbols, roles, relationships, social cognitions, and behavior; 2. Adjustment is the motivational process whereby sojourners attempt to modify behaviors to decrease negatively interactions and experiences and increase positive ones; 3. Cross-cultural adaptation is the positive consequence of the adjustment process in which behavioral modifications produce neutral or positive affect and successful social interactions; 4. ...read more.

Thus, when I speak of entering a new country or a new culture, I refer to the majority culture of that country. Substantial sociological and anthropological methods exists exploring the long-term adaptation of individuals to a new culture under the framework of immigration and migration. For hundreds of years, movement to a new culture was more permanent than transitory. The long trek across borders seldom was followed by much contact or visits to the "old country." The late 20th century, in contrast, has witnessed an explosion of shorter term cultural transitions of individuals for study, business, government, economic and humanitarian aid, or temporary refuge. Investigations of adjustment to short-term cultural transitions, known as sojourner studies, have been viewed primary through the lens of intercultural communication. ...read more.