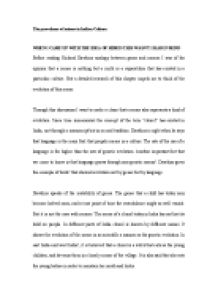 The prevalence of memes in Indian Culture

﻿The prevalence of mimes in Indian Culture WHEN I CAME UP WITH THE IDEA OF MIMES THIS WASN?T I HAD IN MIND Before reading Richard Dawkins analogy between genes and memes I was of the opinion that a meme is nothing but a myth or a superstition that has existed in a particular culture. But a detailed research of this chapter impels me to think of the evolution of this meme. Through this discussion I want to make a claim that a meme also represents a kind of evolution. Since time immemorial the concept of the term ?churel? has existed in India, not through a manuscript but in an oral tradition. Dawkins is right when he says that language is the main fuel that propels meme in a culture. The rate of the rise of a language is far higher than the rate of genetic evolution. Another important fact that we come to know is that language grows through non-genetic means1. Dawkins gives the example of birds2 that showed evolution not by genes but by language. Dawkins speaks of the mutability of genes. The genes that a child has today may become halved soon, and at one point of time the resemblance might as well vanish. ...read more.

Similarly memes have become such a deep part and parcel of our lives that we cannot let go of them from our psychology. If genes evolve through sperms and eggs, memes evolve from mind to mind9. If one idea is put in a mind, it means weeding out all the other, and giving that idea a parasitic growth. This is the way a meme evolves. Similar to the DNA, a meme has a high survival value. It is associated with fecundity also, as language gives it the spur to develop wings and become indoctrinated in the human minds. Thus it appears that memes are replicators. They imitate themselves in a direct proportion to human culture and civilization. Like the genes they too have a kind of a DNA and unbeknownest to all they will exist as long as the culture prevails. Is it not strange that the same churel that exists in India has its global parallels in the entire world:? Dracula, Frankenstein, Lamia, Lilith, Werewolves, Ghosts? etc. this all points to the growth of a analogous human culture, and of the fact that meme will evolve, even in the teeth of evidence, in our minds and hearts, as long as humanity survives. ...read more.

But has anyone tested these tales on the anvil of truth and authenticity? Is it not that we hear these tales and show a favoring propensity to them without ever challenging their veracity? Well, It is not possible for anyone to testify whether Hidimba existed or not, but the existence of the churel Kaalo can be verified. It is true that the village of Kulbhata is desolate even today, but can the reasons behind it be attributed to Kaalo? A deeper study of this meme shows that there are many versions to this story. Some even say that the witch had been killed again when she tried to lure a young girl, riding on a bus. Some even say that the Kaalo incident is nothing but a myth, and that the village was vacated on account of a drought. The more the mouths; the more the versions. It appears that Kaalo is a meme that has become cemented in our minds just like the DNA cemented in our blood. Looking from a scientific point of view, there is no gainsaying that all such folklores and anecdotes will exist on the Indian soil until people prepare themselves to falsify them in the light of their reason, and not emotions. But given the popularity of these memes in Indian culture it does not look possible. Source 1 http://en.wikipedia.org/wiki/Churel#Activities Source 2 http://indianhorrortales.blogspot.in/2012/08/chudail-daayan-story-of-indian-witch.html Source 3 http://www.rubinghscience.org/memetics/dawkinsmemes.html 1. http://www.boldsky.com/yoga-spirituality/faith-mysticism/2014/secrets-from-the-epic-mahabharat-037444.html 2. http://en.wikipedia.org/wiki/Ghatotkacha_(king) 3. http://www.boldsky.com/yoga-spirituality/faith-mysticism/2014/secrets-from-the-epic-mahabharat-037444.html http://realghostories.blogspot.in/2013/07/kaalo.html ...read more.