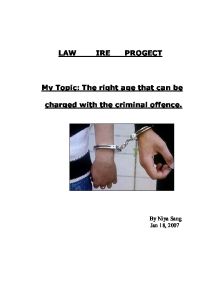 The right age that can be

LAW IRE PROGECT My Topic: The right age that can be charged with the criminal offence. By Niya Sang Jan 18, 2007 1. Why chose this topic? When choosing this topic, I was influenced by Vic Toews's report (Vic Toews is the Member of Parliament MP for Provencher and the Minister of Justice for the Government of Canada). In his report, he expressed his opinions about youth crime. He said it is necessary to lower the age of criminal responsibility. This reminds me to look back to all the records for youth crime of Canada in the past 5 years. From the data, I found there is an obviously phenomenon, that is, the age of youth crime is getting lower and lower than before. So here comes the question: do we need to set a new age for young people to commit an offence? And later on I read a piece of news on BBC. In the news the reporter pointed out England and Wales used to set the age to commit an offence at the age of 10. But later the public started to argue about the age. Most of them think they should move the age up to 14. So we can see now there are two opposite sides of arguments about the age issue of criminal responsibility. For myself, I personally think the government of Canada should lower the age of criminal responsibility. ...read more.

Say, for instance, Jon Enables and Robert Thomson in England, both 10, convicted of 1993 murder of two-year-old James Bulger. But after I did the 30 surveys, I found in fact most people think 12 years and above should the right age barrier. I was kind of surprised at this result. After this, I did some researches on the age barrier for youth crime of different countries; I found most countries set this age above 12 years. Even England and Wales set the age barrier under 12 years, but now the government is being urged to raise the age of criminal reasonability in England and Wales from 10 to 14( according to BBC news, 2005). The following list shows the age barrier of different countries. Facing to all the results and facts, I start to question myself, why people don't want to lower the age barrier even the lowing of the age of maturity happens now??? Is it because people still show big sympathy on young people who commits crime or it is other reasons that make people still think 12 years or above should be the right age??? So I am starting to search answers for all these questions. I read a lot of statements of youth crime written by psychologists, polices, I found that most of them state that young people are still developing their moral character, society believes that there is a greater chance that they can be rehabilitated. ...read more.

Once the other family members cannot give them right instructions on time, tragedy will happen. May be young boys actually did not really know what is violence, but they just thought what the people did in TV or video games were so cool, and they wanted to try as well. So for this reason, guidance should pay attention to what the boys are watching or playing all the time to avoid bad influences on the boys. 4. My conclusion Based on my surveys results and my analysis, I find out my statement about lower the age barrier for youth criminal law does not work. But it doesn't mean if a child under the age of 12 commits a crime, we don't have to pay highly attention on that. In contract, we should view this as a really serious issue. But we treat it differently from adult criminals. Because young people are still developing their moral character, society believes that there is a greater chance that they can be rehabilitated. And they don't have the ability to tell what is right and what is wrong. They are easily get influenced by bad information if no one can guide them and help them. The most important thing is to teach the children how to behave better, and what are the right things to do while others are not. I believe if we can treat the kids who have criminal acts properly, they would surely make a difference in the future. And they will become better men. 5. ...read more.