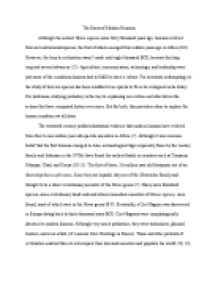 The Roots of Modern Humans

﻿The Roots of Modern Humans Although the earliest Homo sapiens arose forty thousand years ago, humans evolved from several hominid species, the first of which emerged four million years ago in Africa (8-9). However, the leap to civilization wasn?t made until eight thousand BCE, because this leap required several advances (15). Agriculture, communication, technology, and leadership were just some of the conditions humans had to fulfill to have a culture. For scientists, anthropology is the study of how our species has been modified over epochs to fit in its ecological niche today. For historians, studying prehistory is the key to explaining our culture and what drives the actions that have comprised history ever since. But for both, this provides a door to explore the human condition we all share. The twentieth century yielded substantial evidence that modern humans have evolved from four to one million year old ape-like ancestors in Africa (7). ...read more.

Hominids and modern humans emerged and evolved because their traits were selected for reproduction by the environment; this follows the principle of natural selection. The first hominids, australopithecines, had two distinct and advantageous attributes that enabled them to survive: bipedalism and an opposable thumb. The former enabled them to, ?travel distances more easily?spot threatening animals, and carry food and children? (7). The latter enabled them to grasp and make tools (7). However, tools weren?t made until a new genus and species evolved called Homo habilis. Next, the Homo erectus outcompeted the H. habilis because of its adaptability and sophistication. ?Upright man? made specialized tools, migrated, controlled fire, and even had the rudiments of a language (8). Finally, the Homo sapiens appeared as Cro-Magnons, who, with their superior intellect, populated the earth (9). Each of these human species was selected for because they had a larger brain than their ancestor (8-9). ...read more.

Growing crops and domesticating animals provided a steadier source of food in comparison to hunting. The results of this were twofold: first, clans could now settle down in one place (cf. Jarmo and Catal Huyuk), and second, certain members could adopt less survival-focused jobs. With these conditions met, the roots of a culture could finally branch out (15-18). As discoveries in the past century have demonstrated, from australopithecines to Cro-Magnon men, while the Hominidae genus has evolved over forty million years, civilization and culture has existed for less than ten millennia. However, humanity?s tale has not finished. New transitions in the fossil record are still to be found which will provide a more detailed portrait of our evolutionary ancestors. For example, just in 2002, a six million year old skull?the oldest human ancestor yet?was discovered in Chad (11). Moreover, the Homo sapiens species is not the end of the hominid phylogenetic tree. We are merely a stepping-stone to a much greater species?one that the environment will select from within us to populate the earth one day. ...read more.