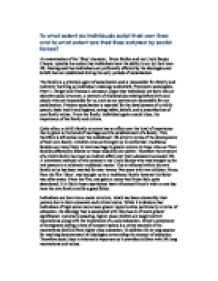 To what extent do individuals script their own lives and to what extent are their lives scripted by social forces?

To what extent do individuals script their own lives and to what extent are their lives scripted by social forces?

An examination of the ‘28up’ character, Bruce Balden and my Uncle Sanjay Chopra, upholds the notion that individuals have the ability to script their own life. Having said that individuals are profoundly affected by the ideologies and beliefs that are established during the early periods of socialization.

The family is a principle agent of socialization and is responsible for directly and indirectly instilling an individual’s ideology and beliefs. Prominent sociologists, Peter L. Berger and Thomas Luckmann, argue that individuals are born into an objective social structure, a network of relationships existing before birth and people who are responsible for us, such as our parents are responsible for our socialization. Primary socialization is essential for the development of a child’s speech, basic health and hygiene, eating habits, beliefs, and a prescribed set of core family values. From the family, individuals gain a social class, the importance of the family and culture.

Quite often, a child’s family structure has an effect over the level of importance that is given to the bond of marriage and the establishment of a family. This therefore is influential over the individuals’ life script in terms of the development of their own family. Children who are brought up in conformist, traditional families are more likely to hold marriage in greater esteem to those who are from families affected by divorce or those raised by one parent. Therefore the structure of a child’s family can have an indirect affect over their adolescent and adult life. A prominent example of this concept is my Uncle Sanjay who was brought up by two parents in a relatively traditional manor. This is reflected within his own family as he has been married for over twenty-five years with two children. Bruce, from the film ‘28up’, was brought up in a traditional family however his father was often away. From the film, one gains a sense that Bruce feels quite abandoned. It is likely these experiences have influenced Bruce’s wish to one day have his own family and be a good father.

Individuals are born into a social structure, which has been attained by their parents due to their economic and cultural status. While it is obvious that individuals of high social status have greater opportunities particularly in terms of education, the ideology that is associated with this class is of much greater significance. Generally speaking, higher-class children are taught correct mannerisms along with the importance of a solid education. Bruce’s acceptance of immigrants during a time of rampant racism is a prime example of his mannerisms distilled from higher class education. In addition his strong passion for teaching demonstrates his ideologies surrounding the concept of education. Therefore social class is inherently important as it provides children with life long mannerisms and values.

The cultural beliefs and ideology instilled by a child’s family can be influential throughout their adolescent and adult life. Sociologists believe that our identities are formed through the characteristic norms and values of cultures. To a large degree culture determines our identity.  Culture defines accepted ways of behaving for members of a particular society in reference to different societies. These characteristics are important sources of our identity and according to many of our societies are name, age, sex, gender, ethnicity, class and region. Throughout his early life, Bruce was brought up as a Christian, which has influenced his way of thinking about society. Bruce states that “a good act is never bad” demonstrating how is religious belief have influenced himself as an individual. This may have been a contributing factor for teaching in a public school.

The importance of the family in the process of developing an individual’s life script is important through the ideologies and beliefs they provide. However through a functionalist view, it is evident that individual social actions are not simply a reaction to external forces. The sociologists, George Mead believes that as individuals we progress past the stage where as a child we respond to significant others to where as adults we are aware of generalised others in role-play. An individuals identity is something they are born with but it’s developed through interactions in society. We are able to negotiate the roles that we play hence self is socially constructed but is being re-shaped by our actions. Therefore as individuals we are able to construct our sense of self through interactions in society. My Uncle Sanjay, who is an investment banker, was brought up with the notion that monetary importance should be placed at a minimum. However throughout his university, he gained the sense that money was extremely important which is a complete reversal of his ideologies. Within the film ‘28up’ Bruce alludes that as young boy he had always had a great respect for authority. But he continues on by saying as an adult, after engaging within an immigrant society and witnessing the poor performance of his government, his over developed sense of authority has diminished.

Through Uncle Sanjay and Bruce Balden, there is a distinct notion that the early periods of socialisation can have an affect on the script of an individual’s life, however it is important to note that in large they are able to script their own lives.