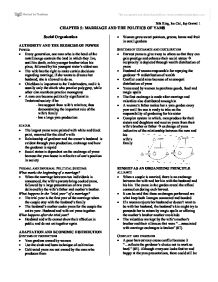 CHAPTER 5: MARRIAGE AND THE POLITICS OF YAMS Social Organization AUTHORITY AND THE EXERCISE OF POWER POWER * Every generation, one man who is the head of the matrilineage controls the land in which they live, until his death, as his younger brother takes his place, followed by his youngest sister's oldest son. * The wife has the right to make certain decisions regarding marriage, if she wants to divorce her husband; she is allowed to do so. * Chiefdom is important to the Trobrianders, and it is usually only the chiefs who practice polygyny, while other clan members practice monogamy * A man can become politically significant in Trobriand society if he: - has support from wife's relatives; thus demonstrating the important role of the wife's family - has a large yam production STATUS * The largest yams were painted with white and black paint, reserved for the chief's wife * Relationship of gardener and the owner's husband is evident through yam production, exchange and how the gardener is repaid * Social status is dependant on the exchange of yams because the yam house is reflective of one's position in society FORMAL AND INFORMAL POLITICAL SYSTEMS What marks the beginning of a marriage? ...read more.

The yams in the garden reveal the affinal connection during each harvest. * It can be said that these exchanges performed are what keep both lineages connected and bonded. * If a woman rejects her husband or doesn't want to be with her husband, the husband's kin might try to persuade her to return by magic spells or offering the mother's brother another axe-blade. * The valuables are kept by the wife's mother's brother and their alliances that were "...associated with marriage exchanges is broken" (87). CONFLICT AND COHESION * A poor harvest may cause conflict because it "...reflects the gardener's choice not to work so hard." (85). Although everyone looks festive and happy at the yam presentations, there could still be "...the danger of unspoken discontent and antagonism" (85). * The poor harvest could have been caused by the anger a gardener feel towards the woman's husband. Perhaps the pig that "...the husband killed the year before to repay him for his work in filling the yam house was too small." (86) * Or, maybe his hard work in making a large yam garden before was ignored by the woman's husband and he was not given "...a stone axe-blade, as is the usual custom for exceptional harvests." ...read more.

* Ritual reflects the relation between yams and sexuality * Rite of Passage: Marriage signifies the change from innocence of childhood to the responsibilities of adulthood --> sexual change MORAL SYSTEMS TABOOS AND SHAME * After the one year trial period in a marriage, it would be shameful for anyone to talk about their sexual life. The couples themselves would show no physical interactions in public such as holding hands. * One of the most offensive verbal assaults to the Trobrianders would be to tell someone to "Fuck your wife (or husband)" (89) because it refers to their sexual life. Something like "Fuck your mother (or father)" (89) would be more much more acceptable. COGNITIVE SYSTEMS SYMBOLS * Yams are symbolic of wealth and power, as Weiner compares it to a "bank account" * Yams are a commodity, and a significant part of the Trobriand culture as yam gardens are politically important and magic spells are chanted during the cultivation of yams * When the yams are on display in their lean-tos, gardeners "compare and appraise each other's productive efforts and everyone talks about which woman will get the most yams" (82). ?? ?? ?? ?? Bibi King, Ina Cici, Jup Grewal 1 ...read more.