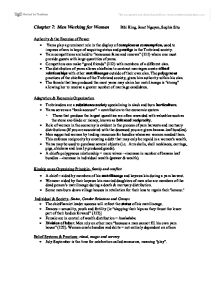 Authority & the Exercise of Power * Yams play a prominent role in the display of conspicuous consumption, used to impress others in hope of acquiring status and prestige in the Trobriand society. * Yam competitions are held to "announce fame and renown" (111) where one must provide guests with large quantities of yams. * Competitors can make "good friends" (112) with members of a different clan. * The distribution of yams allows chieftains to contract marriages create affinal relationships with other matrilineages outside of their own clan. The polygynous practices of the chieftains of the Trobriand society, gives him authority within his clan. * The female that has produced the most yams may claim her matrilineage is "strong" allowing her to receive a greater number of marriage candidates. Adaptation & Economic Organization * Trobrianders are a subsistence society specializing in slash and burn horticulture. * Yams serve as a "bank account" = contribution to the economic system ? Those that produce the largest quantities are often rewarded with valuables such as the stone axe-blade or money, known as balanced reciprocity. ...read more.

* Dances = sexuality, youth and fertility [ie "slapping their hips as they thrust the lower part of their bodies forward" (112)] * Female are in control of wealth distribution = lisaladabu. * Division of labor: Men rely on other men "because a man cannot fill his own yam house" (122). Women create bundles and skirts = not entirely dependent on others Belief Systems & Practices- ritual, magic and sorcery * July-September is the time for celebration called mwasawa, meaning "play". * 3 types of competitions: yam, dance and cricket * Dances are believed to be hundreds of years old through enculturation dances were handed down by ancestors, which can be loaned to others in exchange for money. * Magic is used to transform adults into youthful, seductive performers. Monobogwa once saw his mother dancing and told her, "I always thought you were old but today you are young and beautiful" (113). * The "overturning" of yam houses mark the ending of competitions. * Losers of the measuring of the yam competition are believed to want to "destroy the members of the other lineage through sorcery" (115). ...read more.

* Banana leaf bundles symbolize women's wealth as "subsume all of men's resources" (122). There are 4 types of bundles: yawovau (new), migileu (clean), yabwabogwa (old) and yapagatu (dirty) with new bundles being valued the most. Societies & Cultures in Contact- colonialism and conversion * After colonization, the creation of trade stores allowed Trobrianders to buy materials such as rice. Resources from stores could be traded for banana leaf bundles. * Missionaries introduced cricket "as a substitute for village fighting and as a sport that would replace the harvest dancing and open sexuality." Globalization- globalization and acculturation * Trobrianders adapted cricket and competitions would be held with other villages. * Men decorate themselves with dancing gear and women are no longer treated as equal dance partner but have adapted the older British tradition as spectators. * Trobrianders started to use money in order to pay school fees, government taxes, trade store goods, and airfares to the capital of Papua New Guinea. ?? ?? ?? ?? Chapter 7: Men Working for Women Bibi King, Janet Nguyen, Sophia Situ ...read more.