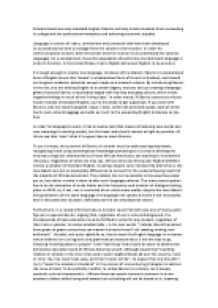 Using &quot;Ebonics&quot; in American Schools. Schools should use only standard English. Ebonics will only hinder students from succeeding in college

ï»¿Schools should use only standard English. Ebonics will only hinder students from succeeding in college and the professional workplace and achieving economic equality. Language is a series of codes, conventions and protocols that have been developed to successfully transmit a message from the sender to the receiver. In order for communications to work, both the sender and the receiver must understand the code (or language). On a societal level, the entire population should know one dominant language in order to function. In the United States, that is English (American English, to be precise.) It is tough enough to master one language, let alone all the dialects. Ebonics is a bastardised form of English (much like "Jouale" is a bastardised form of French in Québec), and should not be given academic attention except maybe as a research subject. By introducing Ebonics in the mix, you are diluting English to a certain degree, and you end up creating a language ghetto because Ebonics is associated largely with hip-hop and gang culture, which evoke negative feelings in much of the "hiring class." In other words, if Ebonics comes out of your mouth instead of standard English, you're less likely to get a good job. ...read more.

He adds, and quite rightfully so, that to teach the English language in a manner which belittles its true linguistic and grammatical characteristics is not the way to go, meaning ?teaching down to people? is the ?last thing? that should be done to address the diminutive education levels of African-American youth. Although aware that ?teaching children in schools in the inner cities and in poor neighborhoods all over the country, rural or inner city, has never been easy, and that it never will be?, he argues that one shouldn?t try to ?lower the academic standards? in the process of encountering strategies to address the issue at hand. To be perfectly truthful, to utilize Ebonics is a choice, not a deeply symbolic cultural characteristic ? African-American youth choose to converse in a non-academic dialect whilst being well aware their schooling will not be based on it, meaning they need not look far to encounter the culprit for their probable academic incapacity and failure. This opinion is backed by, among others, UCLA professor John McWhorter, who is a firm advocate of the notion that the ?reason for black students' failure? is often ?misidentified? and wrongly attributed to the difference between the dialects; rather, McWhorter argues that African-American children fail ...read more.

This dramatic change would impact everybody, not counting that teaching teachers to learn African-American idioms is wrong. Teaching ebonics is like teaching down to people, because instead of teaching students the correct, colloquial english teachers would teach them a simpler, more basic english, thus students would not be taught fairly. Instead of teachers making African-American students lives easier they should make them learn the english that everybody in the US speaks, and instead of letting students pass through grades with an easier english teachers should teach them the correct English, because the vocabulary they know is no where close to the one they will need to use in the future. Also, Africa-Americans enter schools every year and end up learning nothing because what they are taught in math, sciences, and other subjects cannot relate to because the proper English language. Since standard english is the ?lingua franca?, not African-American english, they cannot have a long-lasting future since they cannot communicate properly with other people, and since standard english is the language of commerce, business and industrial world they will not have a very good job. Hence the reason why African-Americans need to learn the standard english. ...read more.