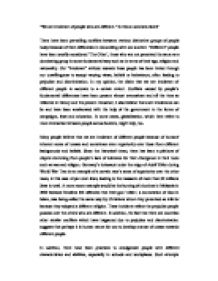 We are intolerant of people who are different. Is this an accurate claim?

"We are intolerant of people who are different." Is this an accurate claim? There have been prevailing conflicts between various distinctive groups of people today because of their difficulties in reconciling with one another. "Different" people have been usually considered 'The Other', those who are not perceived the same as a dominating group in some fundamental way such as in terms of their age, religion and nationality. Our "Intolerant" attitude towards these people has been hinted through our unwillingness to accept varying views, beliefs or behaviours, often leading to prejudice and discrimination. In my opinion, the claim that we are intolerant of different people is accurate to a certain extent. Conflicts caused by people's fundamental differences have been present almost everywhere and all the time as reflected in history and the present. However, I also believe that such intolerance can be and have been ameliorated with the help of the government in the forms of campaigns, laws and education. In some cases, globalization, which here refers to more interaction between people across borders, might help, too. ...read more.

In addition, there have been practices to amalgamate people with different characteristics and abilities, especially in schools and workplaces. Such attempts reflect society's desire for people to stay identical instead of diverse, possibly because it is believed to be more 'convenient' in managing people. In most schools, every student is obliged to wear the school uniform, similar, approved shoes, hairstyle and even socks. This suppresses the young people's diverse fashion styles. In the workplace, an example of the attempt to amalgamate workers with different skills can be reflected through a movie, 'The Dead Poet's Society.' In this movie, a protagonist teacher gives lessons to his students in a different style. Instead of the school's traditional, rigid style of teaching in classrooms, he brings the students outside the classroom to teach values. However the school strongly disapproves of his distinct way of educating and soon dismisses him. Through these two examples, we can see that there is society's expectation for everyone to conform to its 'standard'. ...read more.

In today's modern world, there are many chances for us to interact with one another from different countries with the help of technology, such as the Internet and our advanced transportation system. This helps expose us to the different types of people in the world and facilitates the learning about their different culture and religions. With the continuous interaction, we are eventually becoming more tolerant of the different people because we now understand them better. Our previous prejudice about them can also be reduced. In conclusion, it is true that we are sometimes intolerant of people who differ from us. However, it is not impossible to improve our tolerance on them as seen from the examples of the Singapore government and global interaction between people. Nonetheless, it is important to note that there are some cases, such as in school and workplace, where conformity is admittedly necessary and preferred; it is rules and regulations that everyone has to follow in respect of the institutions and there are so far very few ways to change the rigid styles that many of today's schools and workplaces enforce on people. ...read more.