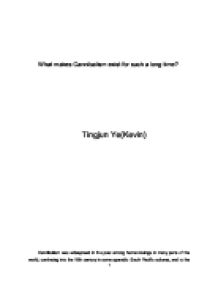 What has made Cannibalism exist for such a long time?

What makes Cannibalism exist for such a long time? Tingjun Ye(Kevin) Cannibalism was widespread in the past among human-beings in many parts of the world, continuing into the 19th century in some sporadic South Pacific cultures, and to the present day in parts of equatorial Africa. In a few cases in island Melanesia, native flesh-markets are still existed.(Bruce M. Knauft, 1999) "Fiji used to be known as the 'Cannibal Isles'. Cannibalism has been well documented around the world, from Fiji to the Amazon Basin to the Congo to Maori New Zealand. Neanderthals are believed to have practiced cannibalism, and they may have been eaten by modern humans." (Gibbons, 1997) The practice of human cannibalism is highly variable and can be defined in a number of ways: (1) Endocannibalism is the consumption of deceased individuals who live within the group, such as relative and friends. (This costume was common in New Guinea as an act of worship.) (2) Exocannibalism is the consumption of outsiders as an act to gain strength or corroborate power over the vanquished, who had usually been murdered. (3) Starvation or survival cannibalism is the consumption during real or perceived starvation. ...read more.

� Insanity or social deviancy - "Cannibalism is not mentioned in the formal index of mental disorders, the Diagnostic and Statistical Manual of Mental Disorders. The medical literature on the topic is likewise sparse. "(Cecil Adams, 2010) Joseph Jordania recently suggested that removing the dead bodies through ritual cannibalism might have had a utility of assaulter control in hominids and early humans, aiming to destroy predators' and scavengers' access to hominid (and human) bodies.(Jordania, Joseph. 2011) In 2003 a publication in Science received a large amount of press attention when it suggested that early humans may have practiced comprehensive cannibalism. According to this research, genetic markers commonly found in modern humans worldwide suggest that today many people carry a gene that evolved as protection against the brain diseases that can be spread by consuming human brain tissue. A 2006 reanalysis of the data questioned this hypothesis, as it claimed to have found a data collection prejudice, which led to an incorrect conclusion. This claimed prejudice came from incidents of cannibalism used in the analysis not being due to local cultures, but having been carried out by seafarers, stranded explorers or escaped convicts. ...read more.