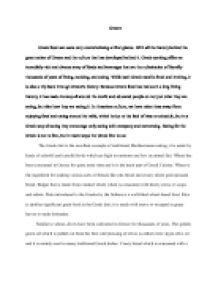 While each Greek meal is fresh and inviting, it is also a trip back through Greece's history. Because Greek food has had such a long living history, it has made its way all around the world and educated people on not just what they are eating, but also ho

Greece Greek food can seem very overwhelming at first glance. With all the history behind the great nation of Greece and the culture that has developed behind it. Greek cooking offers an incredibly rich and diverse array of foods and beverages that are the culmination of literally thousands of years of living, cooking, and eating. While each Greek meal is fresh and inviting, it is also a trip back through Greece's history. Because Greek food has had such a long living history, it has made its way all around the world and educated people on not just what they are eating, but also how they are eating it. In American culture, we have taken time away from enjoying food and eating around the table, which is due to the lack of time or schedule, but in a Greek way of eating they encourage only eating with company and conversing. Eating for the Greek is not to live, but in more ways the Greek live to eat. The Greek diet is the excellent example of traditional Mediterranean eating; it is made by kinds of colorful and tasteful foods which are high in nutrients and low in animal fats. Wheat has been consumed in Greece for quite some time and it is the main part of Greek Cuisine. Wheat is the ingredient for making various sorts of breads like pita bread and crusty whole grain peasant bread. Bulgur that is made from cracked whole wheat is consumed with hearty stews or soups and salads. Pasta introduced to the Greeks by the Italians is a well-liked wheat-based food. Rice is another significant grain-food in the Greek diet; it is made with stews or wrapped in grape leaves to make dolmades. Similar to wheat, olives have been cultivated in Greece for thousands of years. The golden green oil which is pulled out from the first cold pressing of olives is called extra virgin olive oil and it is mainly used in many traditional Greek dishes. ...read more.

Guests should be seated after the host's invitation, and it guests should never be seat at the place where the dishes are served. Similar to Greek culture, dinner starts only when the host starts. On a typical Chinese dining table, there is always a cup, a bowl on a small dish, together with the chopsticks and table spoons. Dishes are always presented in the center of the table so everyone can see the food. Other than soup, all other food is expected to be eaten with chopsticks. But there are certain things that shouldn't be done when using chopsticks. Never stick chopsticks in the center of rice, as this resembles the offering of incense to spirits. Eating should also be paced with everyone else at the table. When eating out, it is sincere to fight to pay the bill. Although the host is expected to pay, offering is very much appreciated. In Greek culture, you will only find food taboos in their religion. As a Pythagorean, beans are restricted from their daily diet. Some reasons to why beans are not eaten are the connection of beans to Hades. Another reason is that it was believed that souls return through beans to reincarnate. In the Orthodox Church, certain foods are not allowed during Lenten Fasting. Lent Fasting is intended as a spiritual preparation for an experience of communion with God. Some foods restricted during Lent are meat and meat products, dairy, fish, and olive oil. Since this fasting is voluntary, it is not necessarily considered a taboo. Like the Greeks, the Chinese do not have many food taboos. The better known one is eating beef. Some Chinese feel that ox help farmers in the field so they feel that eating beef is eating their helper. Also, similar to the Orthodox Church, the Chinese do not eat meat on the 15th of every lunar month. This is usually done to bless a loved one. ...read more.

For nearly half a century, 1905-1945, this area was to contain the heart of Greek town, a community of immigrants and their families representing one of a score of ethnic "cities within a city," as well as a central reference point for residents of smaller Greek communities throughout Northern California." However, the Greeks in San Francisco currently do not have an entire neighborhood to call their own, unlike the Russians (Russian Hill), Chinese (Chinatown), Latinos (Mission) or Japanese (Japantown). Although, SOMA is not known to be a predominately Greek neighborhood there seems to be many of them around this area. Robert Wilson also touches on this particular neighborhood. He says, "If you want to find the social center of San Francisco's Greek colony you will immediately set out for the coffee house in the vicinity of Third and Folsom streets. There is a Greek population here of approximately 11,500 and there are 26 coffee houses patronized almost exclusively by Greeks. The Athenians used to talk politics, religion, philosophy in the streets and market places; the coffee house offers the modern forum and club. Here you find "coffee and - not "coffee and doughnuts," but coffee and conversation." As currently seen on Yelp, there are approximately 51 Greek or Mediterranean restaurants, cafes, and coffee houses scattered everywhere in San Francisco, most of which are seen in Russian Hill/North Beach/Union Square/South Beach/Embarcadero/ and Mission neighborhoods and only a few of them located in SOMA. This would seem as though the Greek colony in SOMA as mentioned by George Daskarolis and Robert Wilson has since dispersed and have taken their talents and presence all over San Francisco. Sources http://greekfood.about.com/od/quenstionsanswers/f/ancientcooking.htm http://www.crystalinks.com/greekculture.html http://www.studyabroadgreece.com/history-culture/greek-food.html http://books.google.com/books?id=eKdbaMY5AHEC&pg=PA9&lpg=PA9&dq=information+on+the+greek+culture+meal+cycles&source=bl&ots=kNeWmVS3An&sig=d3RWKe4CQEsnkd-uL9vDcE5Zuks&hl=en&ei=F1HXS7TkJZLgswPrg92lAg&sa=X&oi=book_result&ct=result&resnum=2&ved=0CAgQ6AEwAQ#v=onepage&q&f=false http://www.kwintessential.co.uk/resources/global-etiquette/greece-country-profile.html http://www.vayama.com/etiquette/greece/ http://home.wavecable.com/~photios/fasting.htm http://plato.stanford.edu/entries/pythagoras/ http://hubpages.com/hub/Greek-Foods-and-Drinks-Greek-Ouzo-Etiquette http://www.globalgourmet.com/food/egg/egg0397/oohistory.html http://en.wikipedia.org/wiki/Herbalism "Ancient Greek Religion." Paganism: Past & Present . 29 April. 2010 <http://library.thinkquest.org/28111/newpage2.htm>. "Greek Animal Sacrifice." Kidipede .15 Jan. 2009. 29 April. 2010 <http://www.historyforkids.org/learn/greeks/religion/sacrifice.htm>. "Greek Cuisine." Global Delights .2010. Mediterrasian.com. 29 April. 2010 <http://www.mediterrasian.com/cuisine_of_month_greek.htm>. "Overview of Ancient Religion." Religion Facts . 20 Jan. 2005. 29 April. 2010 <http://www.religionfacts.com/greco-roman/overview.htm> ...read more.