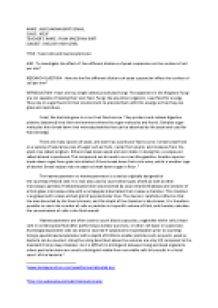 ﻿NAME : NUR SAKINAH BINTI ISMAIL CLASS : M12F TEACHER`S NAME : PUAN MAZDIYAH BINTI SUBJECT : BIOLOGY HIGH LEVEL TITLE : Yeast cells and haemocytometer AIM : To investigate the effect of five different dilutions of yeast suspension on the number of cell per mm3 RESEARCH QUESTION : How do the five different dilutions of yeast suspension effect the number of cell per mm3 INTRODUCTION :Yeast are tiny single-celled (unicellular) fungi. The organisms in the Kingdom Fungi are not capable of making their own food. Fungi, like any other organism, need food for energy. They rely on sugar found in their environment to provide them with this energy so that they can grow and reproduce. Yeast, like bacteria grow in or on their food source. They produce and release digestive proteins (enzymes) into their environment where the sugar molecules are found. Complex sugar molecules then break down into monosaccharides that can be absorbed by the yeast and used for food (energy). There are many species of yeast, and each has a particular food source. Certain yeast feed on a variety of natural sources of sugar such as fruits, nectar from plants, and molasses from the plant crop called sorghum. Others break down wood and corn stalks. ...read more.

If less than 90% of the cells are free from contact with other cells, the count should be repeated with a fresh sample. Improper filling of chamber The chamber and cover slip should be cleaned first with distilled water, then by ethanol and wiped dry with a Kimwipe. Failure to adopt a convention for counting cells in contact with boundary lines or each other Develop a convention on which you do not count half of the cells that touch a border. For example, you only count the cells that touch the top border and left border, but do not count the cells that touch the bottom and right border. You should be consistent to increase the accuracy of your results. Statistical errors With careful attention to detail and by counting systematically and clearly, the overall error in counting can be reduced to between 10% and 15%. Parallax errors Make sure your eye is parallel with the level of the meniscus. Impurities in the suspension Clean all the apparatus thoroughly before beginning the experiment. Use a higher power of objective lens on the microscope to ascertain whether it is a yeast cell or not before counting a certain particle if you are unsure. Movement of yeast cells Wait a few second till the liquid suspension has stopped flowing and the yeast cells have stabilised before counting. ...read more.