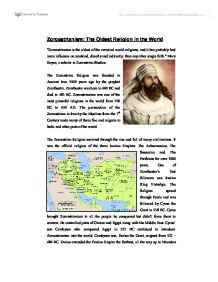 Zoroastrianism: The Oldest Religion in the World

Zoroastrianism: The Oldest Religion in the World "Zoroastrianism is the oldest of the revealed world-religions, and it has probably had more influence on mankind, directly and indirectly, than any other single faith." Mary Boyce, a scholar in Zoroastrian Studies. The Zoroastrian Religion was founded in Ancient Iran 3500 years ago by the prophet Zarathustra. Zarathustra was born in 660 BC and died in 583 BC. Zoroastrianism was one of the most powerful religions in the world from 558 BC to 650 AD. The persecution of the Zoroastrians in Iran by the Muslims from the 7th Century made many of them flee and migrate to India and other parts of the world. The Zoroastrian Religion survived through the rise and fall of many civilizations. It was the official religion of the three Iranian Empires: The Achaemenian, The Sassanian and The Parthians for over 1000 years. One of Zarathustra's first followers was Iranian King Vistashpa. The Religion spread through Persia and was followed by Cyrus the Great in 558 BC. Cyrus brought Zoroastrianism to all the people he conquered but didn't force them to convert. He controlled parts of Greece and Egypt along with the Middle East. ...read more.

The initiation of a child into the fold of the Zoroastrian religion is known as Navjote. The Navjote takes place between the ages of seven to eleven for both boys and girls. They are made to wear the sudreh (thin shirt made of Muslin cloth) and kusti (a sacred cord made of 72 threads of lamb's wool). This is to be worn by a Zoroastrian daily to remind them of their basic teachings "Good Thoughts, Good Words and Good Deeds"3. The Wedding Ceremony is a time for rejoicing. The weeding is preformed by priests who recite prayers from the holy book called "The Avesta", and bless the couple showering them with rice and rose petals. The Ceremony is followed by food and dancing by friends and family3. The funeral ceremony, the last journey of a Zoroastrian, happens in the Tower of Silence. Zoroastrians always dispose their dead by leaving the corpses in the open air to be eaten by birds and beasts. This is a very unusual and a unique tradition of the Zoroastrians, because even in death, they want to give back to the world what they received when they were alive. Because they worship the natural elements, they feel that burying the body would pollute the earth. ...read more.

As one myths goes, a Zoroastrian priests agreed and told the King to get a bowl of milk and a spoon of sugar. He then stirred the spoonful of sugar in the bowl of milk and said "Does any man see the sugar in the bowl of milk now?" When all the Indians shook their head, the priest continued, "We shall sweeten your land and mix with your people, just as the sugar has with the milk". These Zoroastrians hence forth came to be known as the Parsis to denote where they came from, Pars (Persia)3. The Parsis, despite having lived in India for twelve centauries have maintained their religion, culture and traditions. Prosperous, enterprising and literate they denominated the business community of Mumbai (Bombay). Under the British rule in the 19th Centaury, the Parsis became the earliest industrialists in ship building, steel, aviation, textiles and chemicals. They also excelled in the arts and sciences. Noted for their integrity, charitable nature and pioneering spirit they founded hospitals, schools and other institutions to help their people. The contributions made by the Zoroastrians in both Ancient Persia and Modern India are vast, and the impact it has had on the world is huge. The world is indeed grateful to them for what we have today. ...read more.