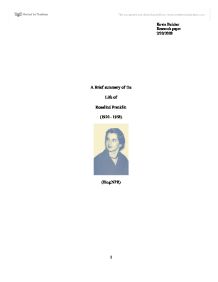 A Brief summary of the Life of Rosalind Franklin. Rosalind Franklin, a woman with a creative mind, raised much controversy about her discoveries with DNA. However, she never received the recognition that she deserved for such an extraordinary find. Eve

A Brief summary of the Life of Rosalind Franklin (1920 - 1958) (Blog:NPR) Over the years many discoveries have been found by many scientists, but one of the most influential was discovery of the double-helix structure of deoxyribonucleic acid (commonly known as DNA). Rosalind Franklin, a woman with a creative mind, raised much controversy about her discoveries with DNA. However, she never received the recognition that she deserved for such an extraordinary find. Even after her death, credit was given to others who benefited from her research and findings. Despite never receiving the accolades that she deserved, many haven't forgotten about her or her greatest discovery. Rosalind was born in London on July 25, 1920. She was the second in a prominent Anglo-Jewish family (Profiles in Science). Rosalind and her family were known to be very accomplished individuals that achieved many goals. Rosalind attended Saint Paul's school for girls, which is a preparatory career institute that focuses on strengthening talents. While attending the school, Rosalind demonstrated an early aptitude for math and science, and an easy facility for other languages such as French, Italian, and German (Profiles in Science). In 1938, Rosalind left Saint Paul's to enroll at Newnham College of the University of Cambridge, which was one of two woman schools at Cambridge University (Cambridge University). ...read more.

Randall had originally planned to have Franklin build up an x-ray Diffraction section and work on analyzing proteins. At the suggestion of the assistant lab chief, Maurice Wilkins, however, Randall asked Rosalind to investigate DNA instead. Wilkins had just begun doing x-ray diffraction work on some unusually good DNA samples. He expected that he and Rosalind would work together (Gribble, Bobbi). However, Randall's communication with Rosalind did not convey this; it was said that only she and graduate student Raymond Gosling would do the DNA work. Rosalind's relationship with Wilkins would have suffered from this misunderstanding. Animosity between Rosalind and Wilkins obviously did not diminish even past her six months of being at King's college. Rosalind began working with her new partner Gosling; she took increasingly clear x-ray diffraction photos of DNA (Maddox, Kathy). After some time Rosalind was able to quickly discover that there were two forms of DNA wet and dry which produced very different pictures. She realized that the wet form was probably a helical (coiled structures are very common in many biological materials) structure, with the phosphates on the outside of the ribose chains (its related compound, deoxyribose, are the building blocks of the backbone chains in nucleic acids). Her mathematical analyses of the dry form diffractions, however, did not indicate a helical structure, and she spent over a year trying to resolve the differences. ...read more.

Unfortunately, by fall of 1956 Rosalind was diagnosed with ovarian cancer. For the next eighteen months she underwent several surgeries and other treatments; she had several periods of remission. She decided to continue working in her lab and seek additional funding for her research team. However, during her uphill battle with her research and ovarian cancer, her life ended at 37 years old on April 16, 1958 in London ("Why Rosalind Franklin"). Rosalind was a woman well known for her accomplishments but, not much credit was awarded to her after all of her hard work. Her discovery of the DNA structure garnered the most public attention. Cricks, Watson, and Wilkins all shared the 1962 Nobel Prize for their work on the DNA structure (Gribble, Bobbi). Without Rosalind's photographic skills Cricks, Watson, and Wilkins wouldn't have been able to construct a model of DNA and probably wouldn't have won the Nobel Prize. Interesting enough they still had no problem to use her research information because they felt that it would help solve the problem of their research. Rosalind's magnificent findings were most definitely admired and played a huge role in understanding the structure of DNA today. She was a heroic, strong and persistent individual that with determination was able to crack open the mystery of DNA. After all she accomplished it is unfortunate that she died at age 37, since she was still so young. Rosalind will never be forgotten for her find. ...read more.