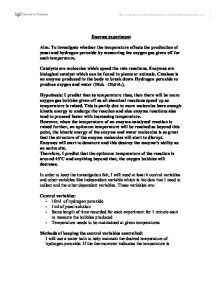 Aim: To investigate whether the temperature effects the production of yeast and hydrogen peroxide by measuring the oxygen gas given off for each temperature.

Enzyme experiment Aim: To investigate whether the temperature effects the production of yeast and hydrogen peroxide by measuring the oxygen gas given off for each temperature. Catalysts are molecules which speed the rate reactions. Enzymes are biological catalyst which can be found in plants or animals. Catalase is an enzyme produced in the body to break down Hydrogen peroxide to produce oxygen and water (2H202 - 2H20+02 ). Hypothesis: I predict that as temperature rises, then there will be more oxygen gas bubbles given off as all chemical reactions speed up as temperature is raised. This is partly due to more molecules have enough kinetic energy to undergo the reaction and also enzyme reactions also tend to proceed faster with increasing temperature. However, when the temperature of an enzyme-catalyzed reaction is raised further, an optimum temperature will be reached so beyond this point, the kinetic energy of the enzyme and water molecules is so great that the structure of the enzyme molecules will start to disrupt. Enzymes will start to denature and this destroy the enzyme's ability as an active site. Therefore, I predict that the optimum temperature of the reaction is around 45�C and anything beyond that, the oxygen bubbles will decrease. In order to keep the investigation fair, I will need at least 4 control variables and other variables like independent variable which is the data that I need to collect and the other dependent variables. ...read more.

I will leave the boiling tube in the water bath for at least 30 seconds until the temperature of the hydrogen peroxide reached to 60 o C. This step will also be repeated when doing with the other desired temperatures. The temperatures can be measured using a thermometer and the thermometer must be kept constantly into the hydrogen peroxide in order to keep track of the temperature of the hydrogen peroxide and ensure that it does not exceed or decrease from the desired temperature. Secondly, I will add 1ml of starch using the 1ml pipette (for accuracy) and place it into the boiling tube containing the hydrogen peroxide. I will then quickly cover the boiling tube with a rubber lid and the tube will be placed directly underneath the measuring syringe (upside down measuring cylinder). Due to the shortage of facilities, I will need to use a measuring cylinder filled with water and place it in the container with a rubber tube directly underneath it to measure the volume of gas bubbles given off. For the next step, I will use a stopwatch to time every minute so that each minute, I will measure the volume of oxygen gas given off from the reaction and record it down. This will be repeated 3 times to get a more valid and reliable data and to spot any anomalies present throughout the experiment. ...read more.

Therefore, my hypothesis that as the temperature increases, the speed of reaction will also increase. When a temperature passed its optimum temperature, the rate of reaction will also decrease as the enzymes cannot cope with the high rise of temperature and therefore the enzymes will be denatured so there will be no reaction as they can no longer bind to a substrate and act as a catalyst. The investigation proves my hypothesis as the results came out as predicted. However, even though that there is a link relating to the results and my hypothesis, I still cannot 100% guarantee that my hypothesis is correct as I need to take the errors and uncertainties into account so I will need to do a further thinking of how to eliminate these errors and improve my investigation. The measurement materials that I used such as the pipette didn't really gave me an accurate measurement of 1ml as there is a 0.5ml of uncertainty so I could have used a better accurate measurement such as burette pipette which gives a better measurement than a normal pipette. The water bath may also not be the best way to maintain temperature constantly as the temperatures can decrease or increase so it will take time to adjust the temperature so better equipment would be an electronic water bath which can maintain the desired temperature constantly. ...read more.